Custom Carbon Fibre Juliets - my homage to this wonderful design

Please excuse the long posting and large number of photos, but I thought some of you would be interested in my homage to the wonderful Oakley Juliets....in Carbon Fibre.

I have been a long time fan of Oakley ever since my first BMX way way back in the 1980's (yup I'm that old ). My first pair were the E-Wire 1.0, swiftly followed by a pair of Titanium Juliets, both of which I still have today and they have been heavily used but still look like new (which I am so pleased about).

I have recently managed to find a pair of titanium Romeo 1.0s with black iridium lenses in almost perfect condition too, although my missus also found them and then said I can't actually have them until Christmas (something to look forward to I suppose)

Well, one of my other passions is carbon fibre and I hand craft a lot of things out of CF and I am constantly designing, prototyping new ideas and learning news ways of creating with this wonderful material.

Now one of the things that I always fancied was a pair of CF Oakleys, but in the style of the Juliets and as far as I know, Oakley never actually made a pair. So I set myelf the challenge of creating a pair.

I started by using 3D software to create the frames and then 3D print them out, but the geometry and tight radiuses etc made it really hard, especially as I wanted to use the genuine Oakley lenses.

Attempt two was to use silicone and create a mould from my own Juliets which worked ok. I then used something called Unidirectional Carbon Fibre tows (multiple strands of the fibre all going the same way) and laid these into the moulds and then used a high quality two part epoxy resin to bond everything together.

This worked, although it was quite basic (no moving bridge etc) and the unidirectional carbon fibre look just like black plastic (albeit with a holographic shimmer about it). Also, certain areas were strong whilst the arm joints were weak, so I had to work out ways of increasing strength and making them look a whole lot better. 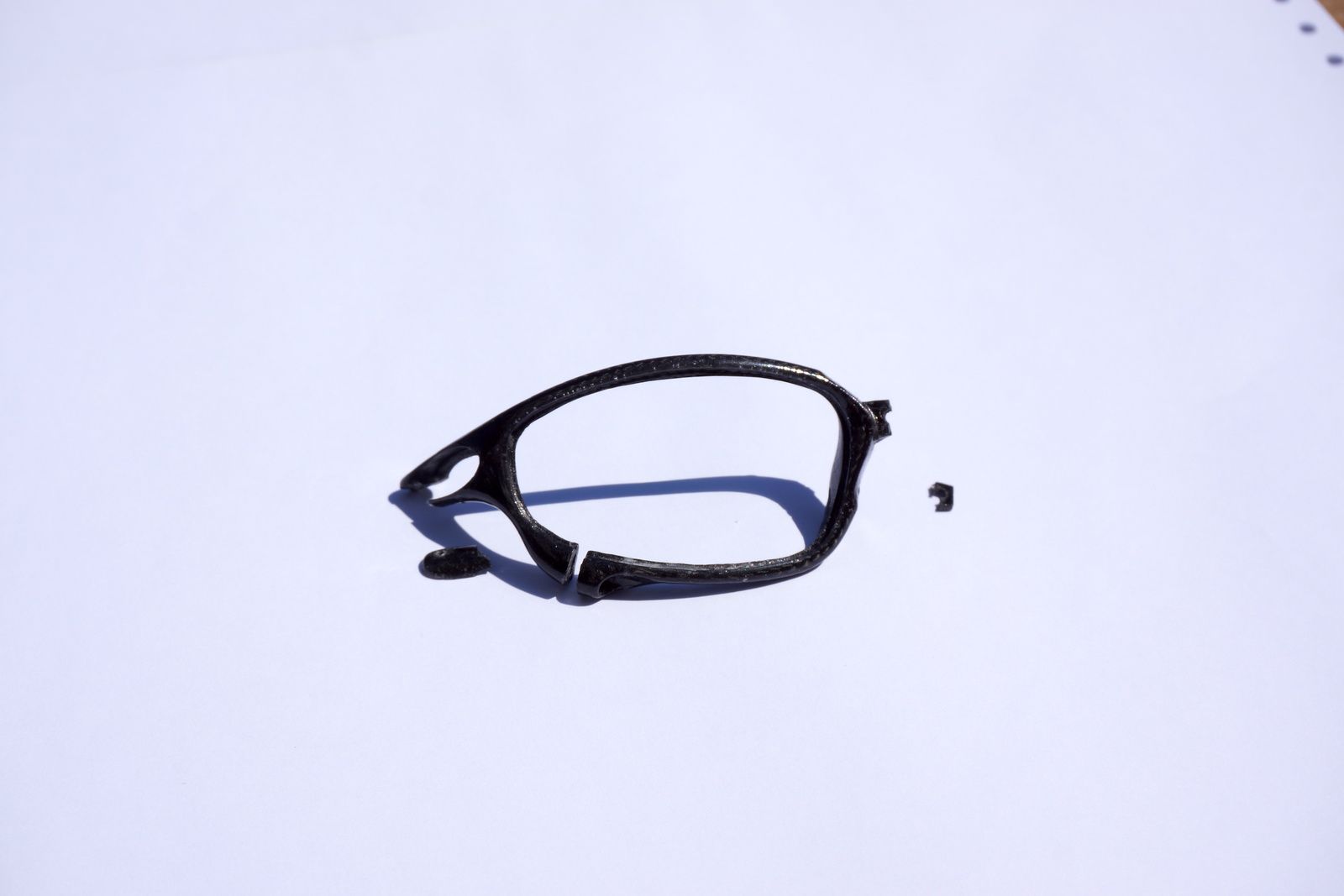 So, prototyping continued and mould improved and eventually, i decided to disassemble (very carfully) my own Juliets and mould each part of the frame using silicone to create moulds for the carbon fibre. 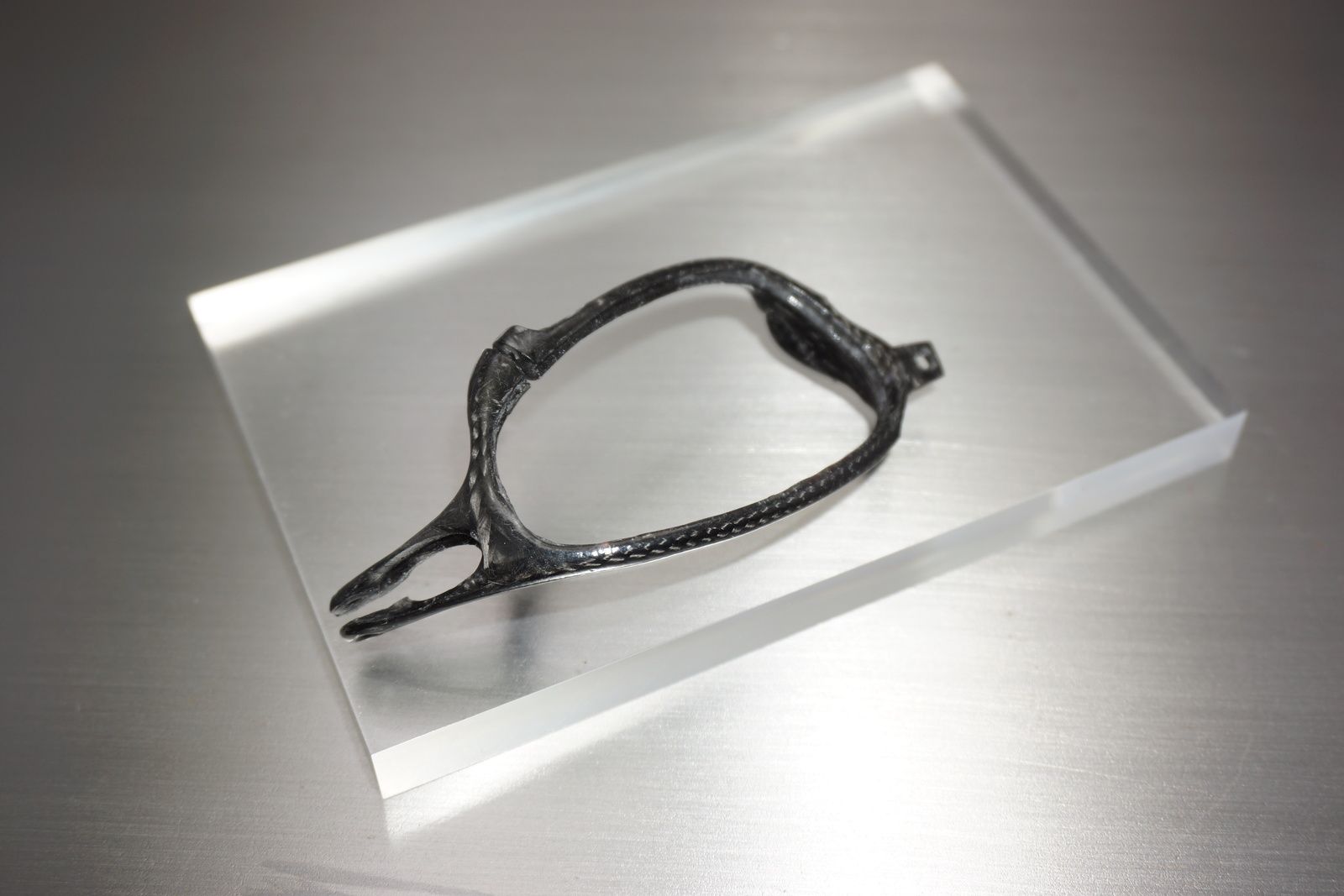 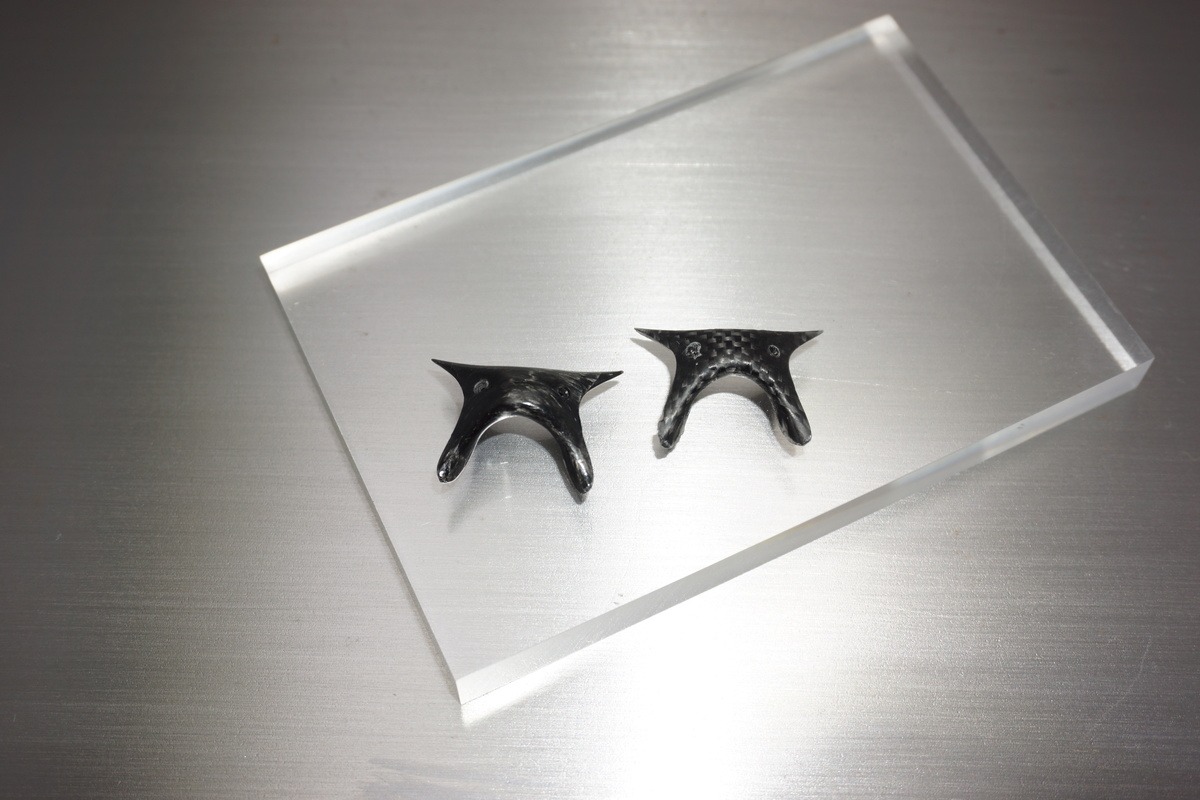 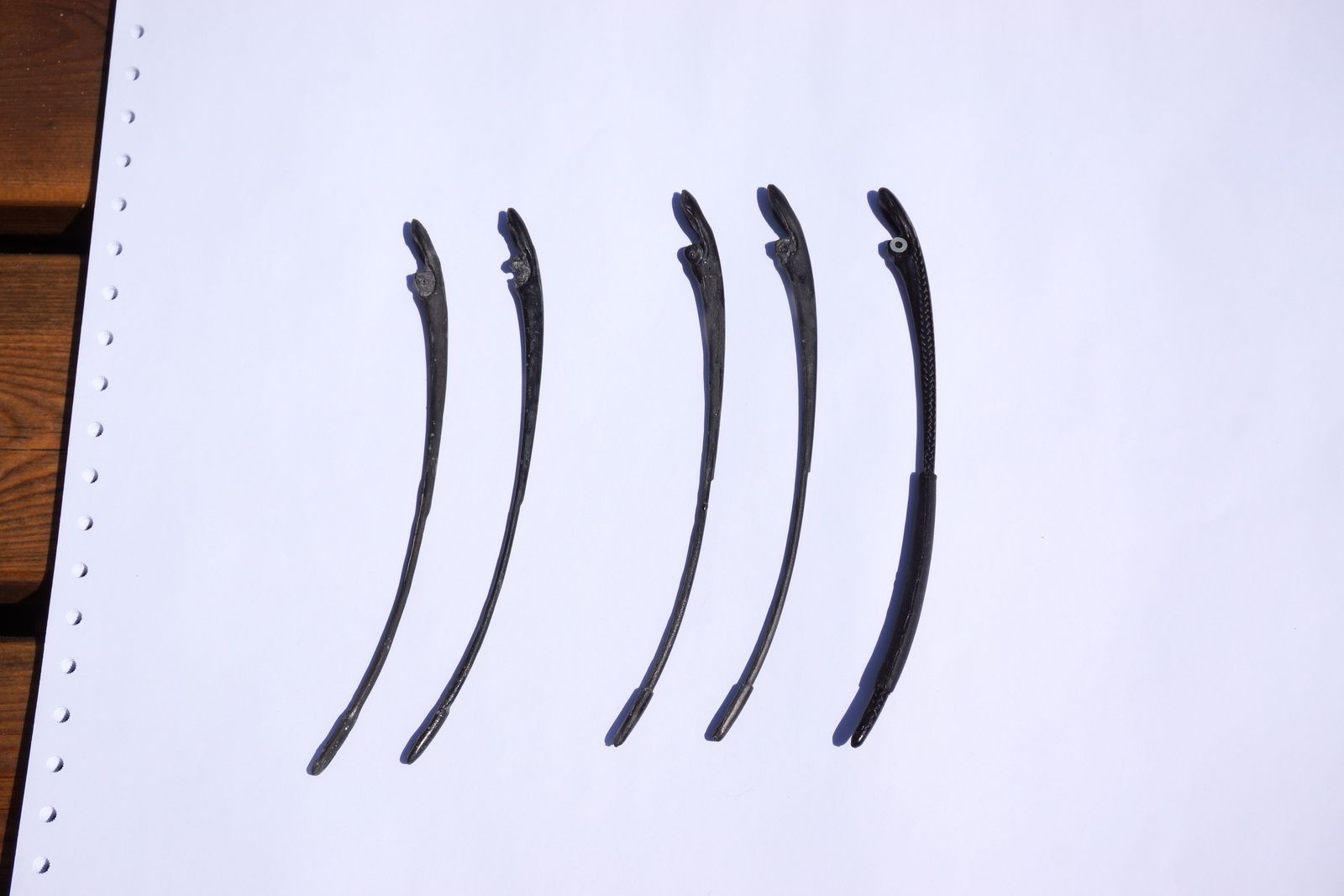 To make them look a lot better, I worked on ways to get braided carbon fibre into the moulds and ways of strengthening at the crucial points where the arms join the lense frames, the bridge and the screw holes. The braided carbon fibre (that takes ages) and the unidirectional carbon fibre for the stress points, made a considerable difference and definitely made them look more like I had originally envisaged. 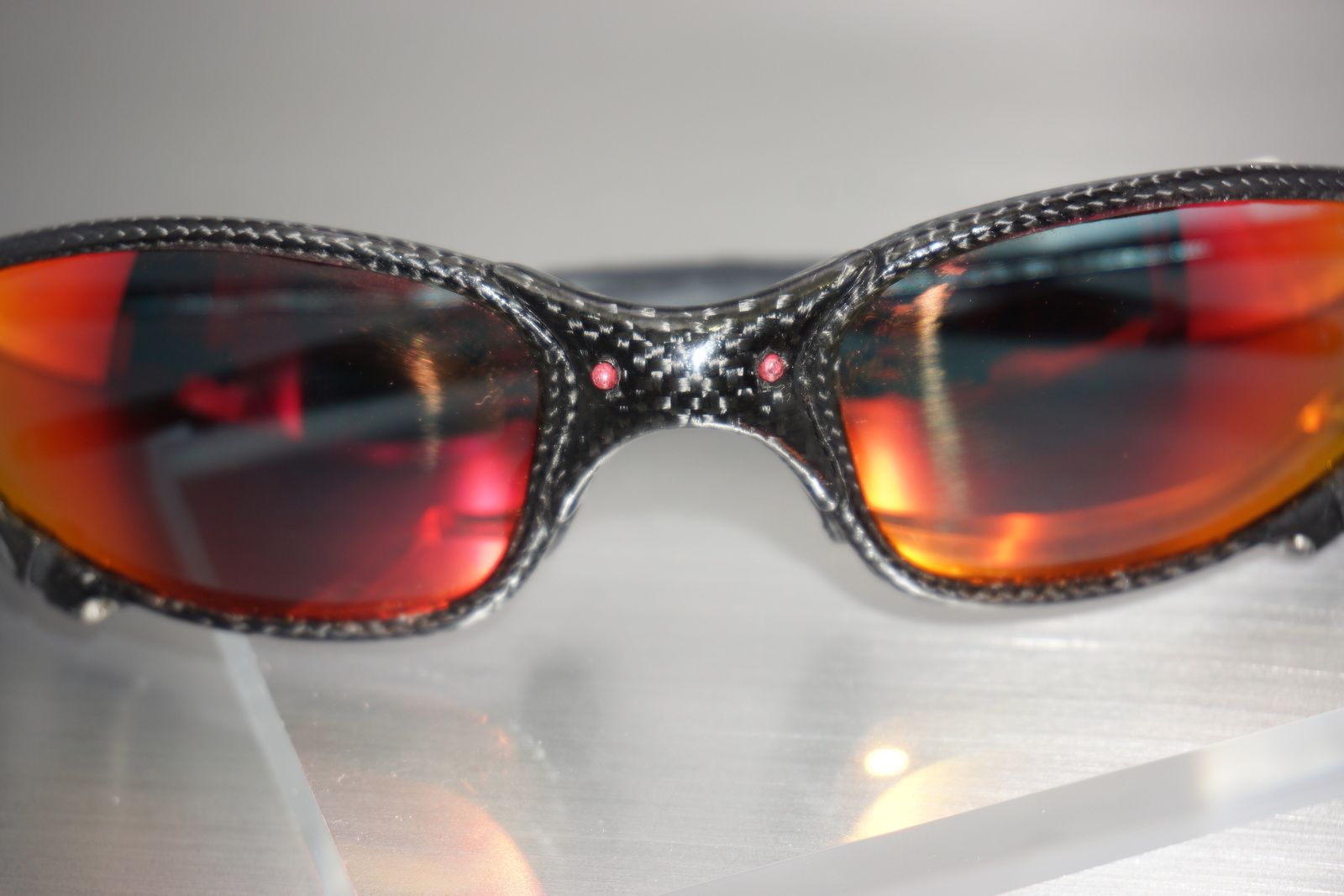 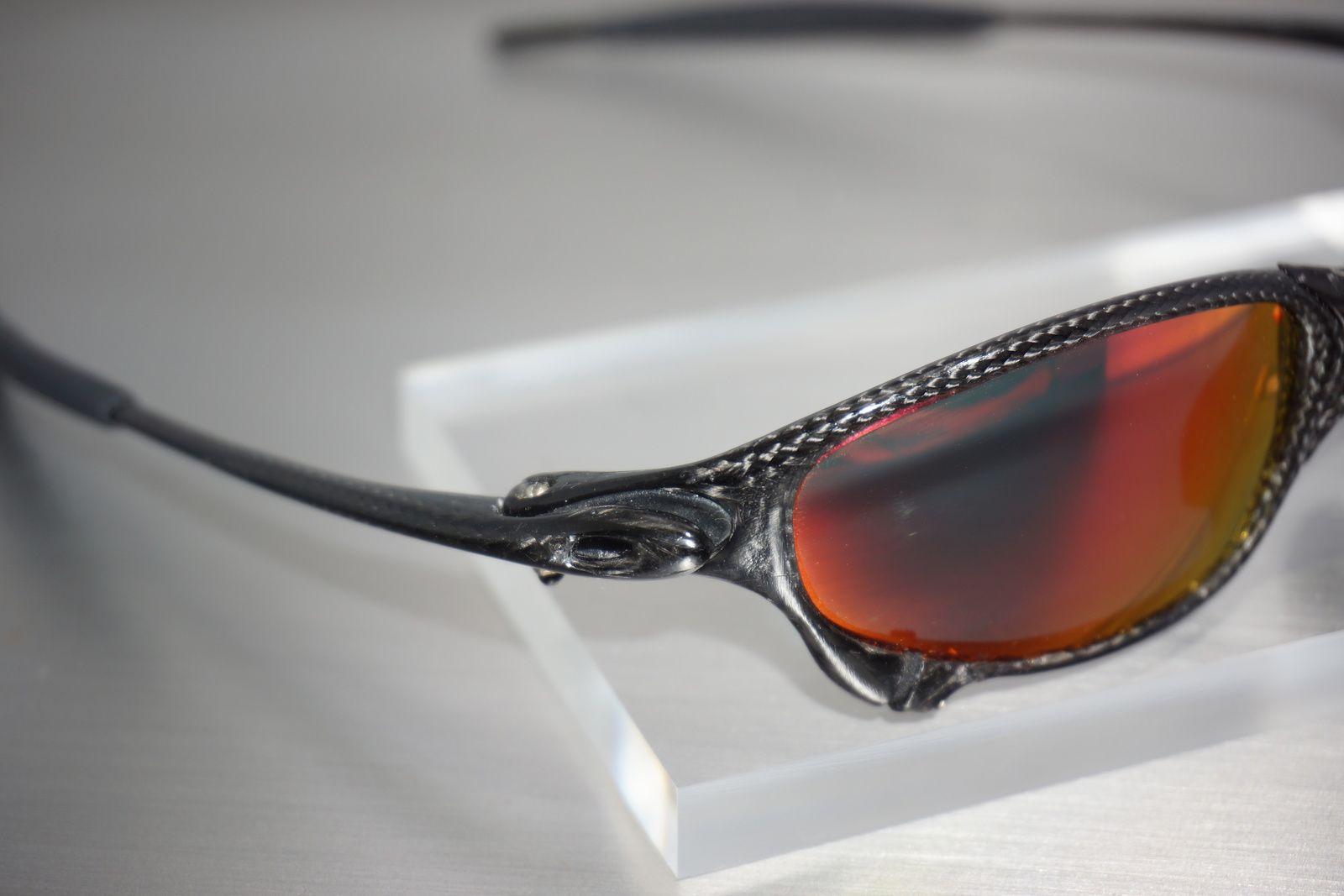 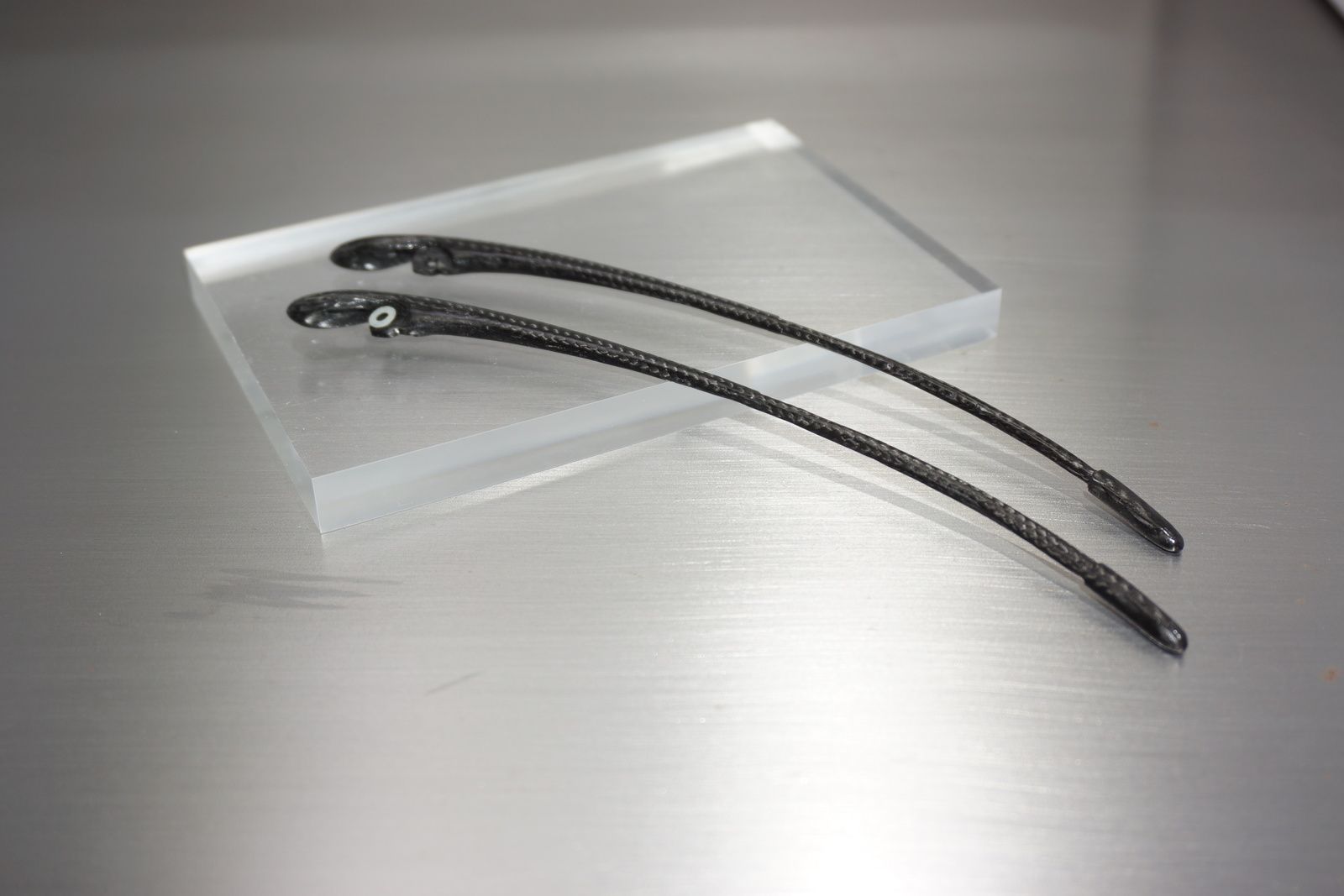 For me the important part was to create each component of the frame in Carbon Fibre, getting the weave correct on the bridge, the braiding on the lense frame and arms correct, the undirectional fibres in the stress points accurate and doing what they are supposed to do. Even the red bridge pins are carbon fibre too, although I wanted a splash of red to contrast with the Carbon Fibre, so they are painted with metalic red paint 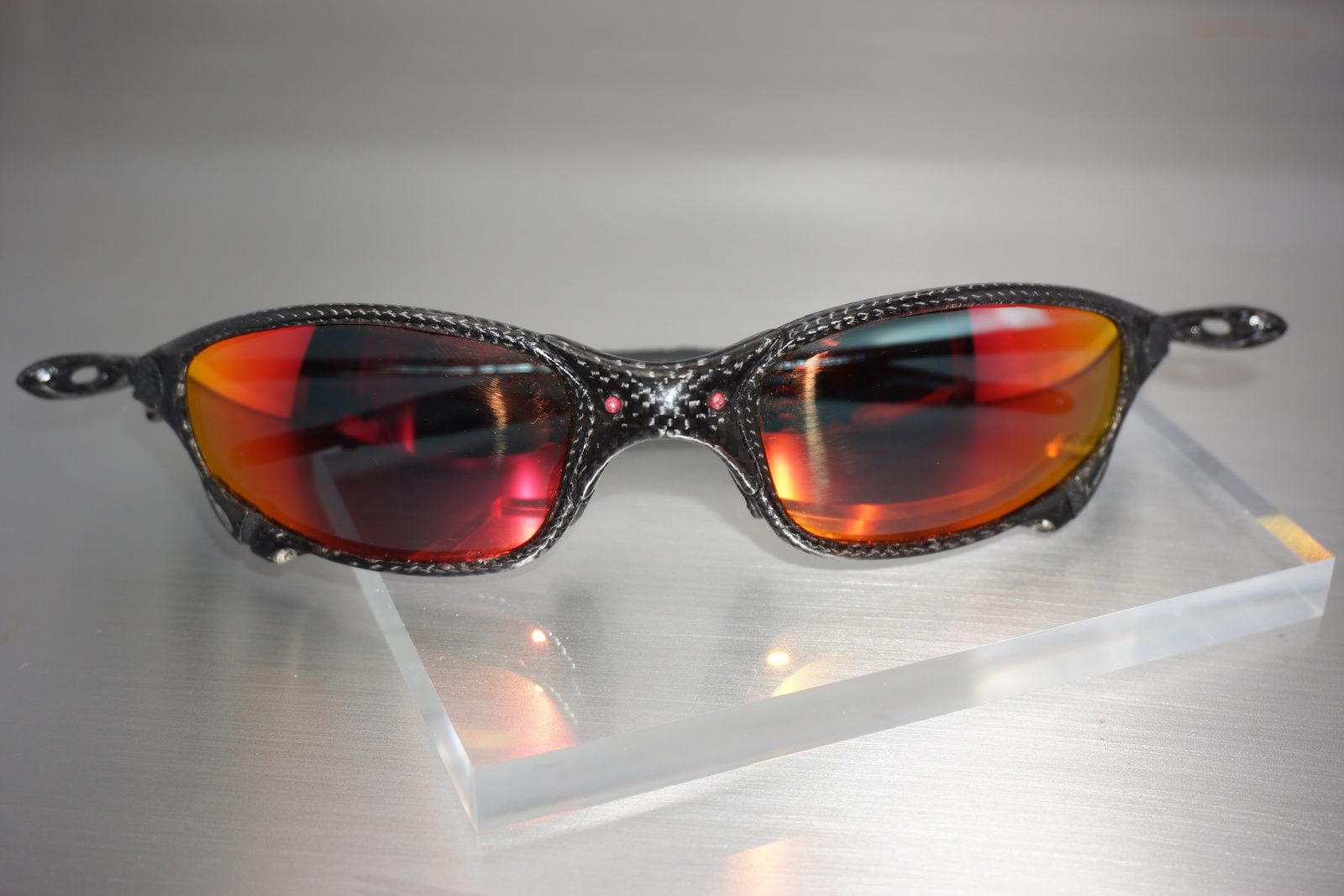 The final stage was to create a suitable case and the one you see in the pictures (which my missus lovingly calls a dolphin as it looks reminiscant of a dolphin) is created from the dimensions of the Juliets when closed, so it's a perfect fit and provides a nice strong protective case for them. 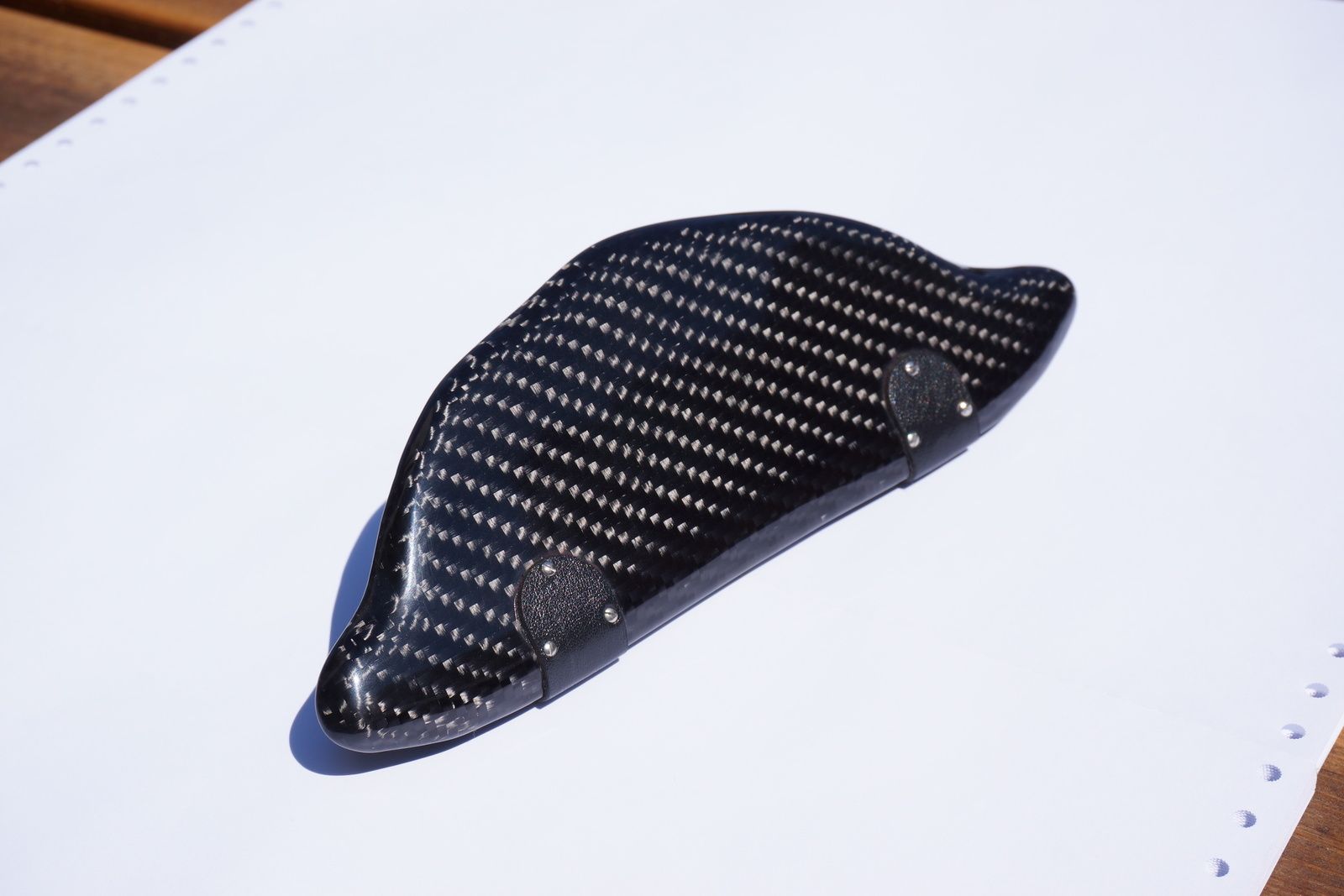 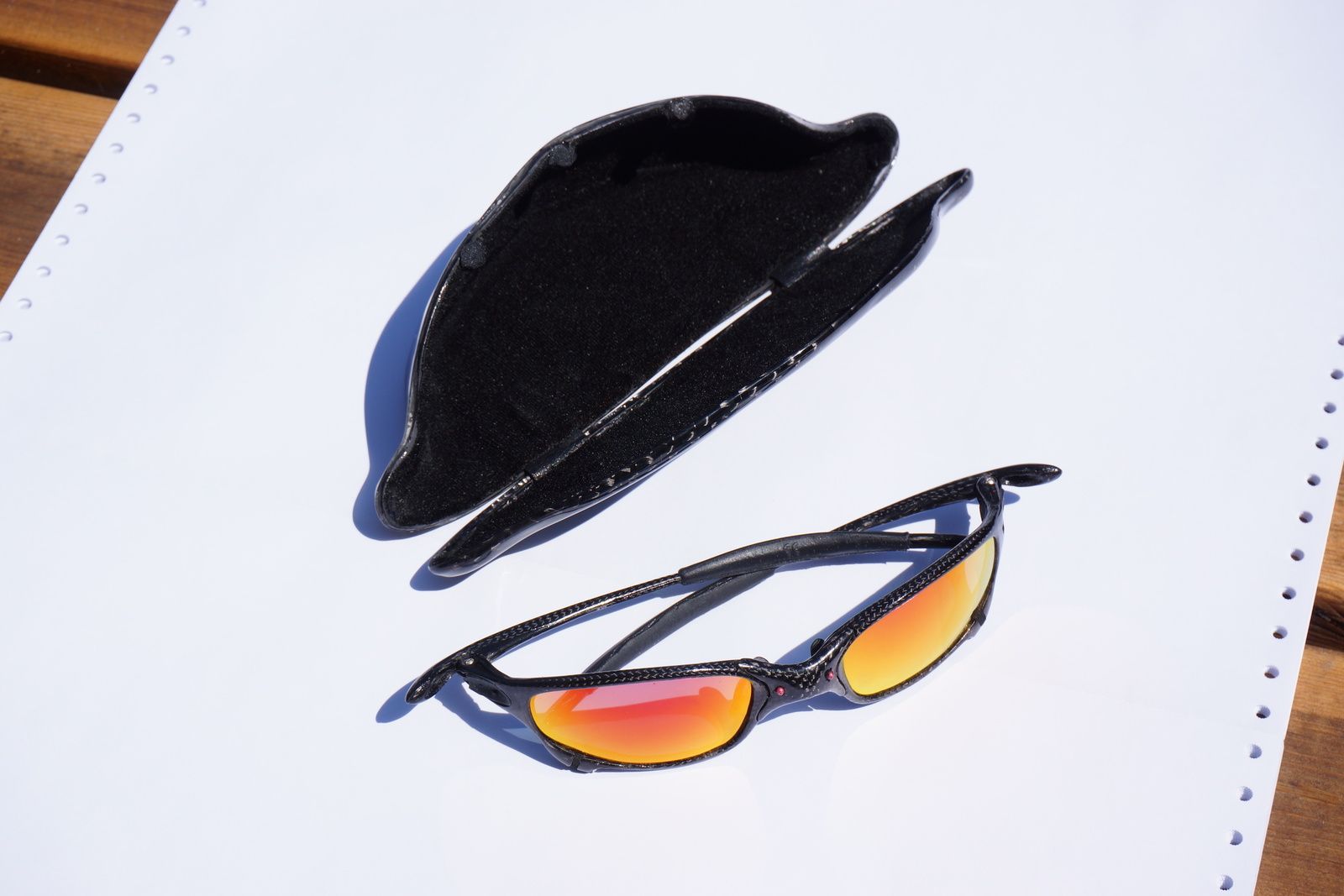 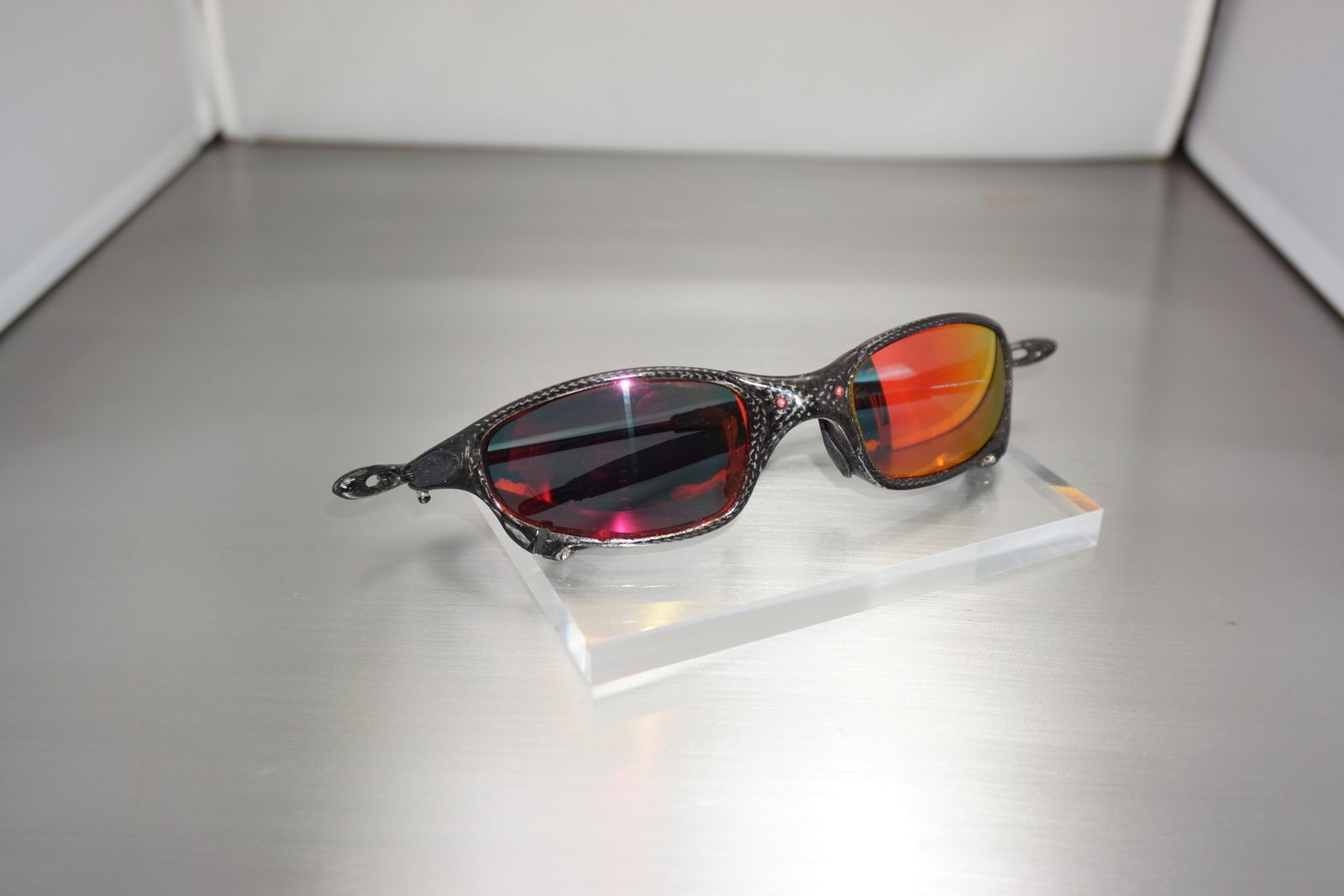 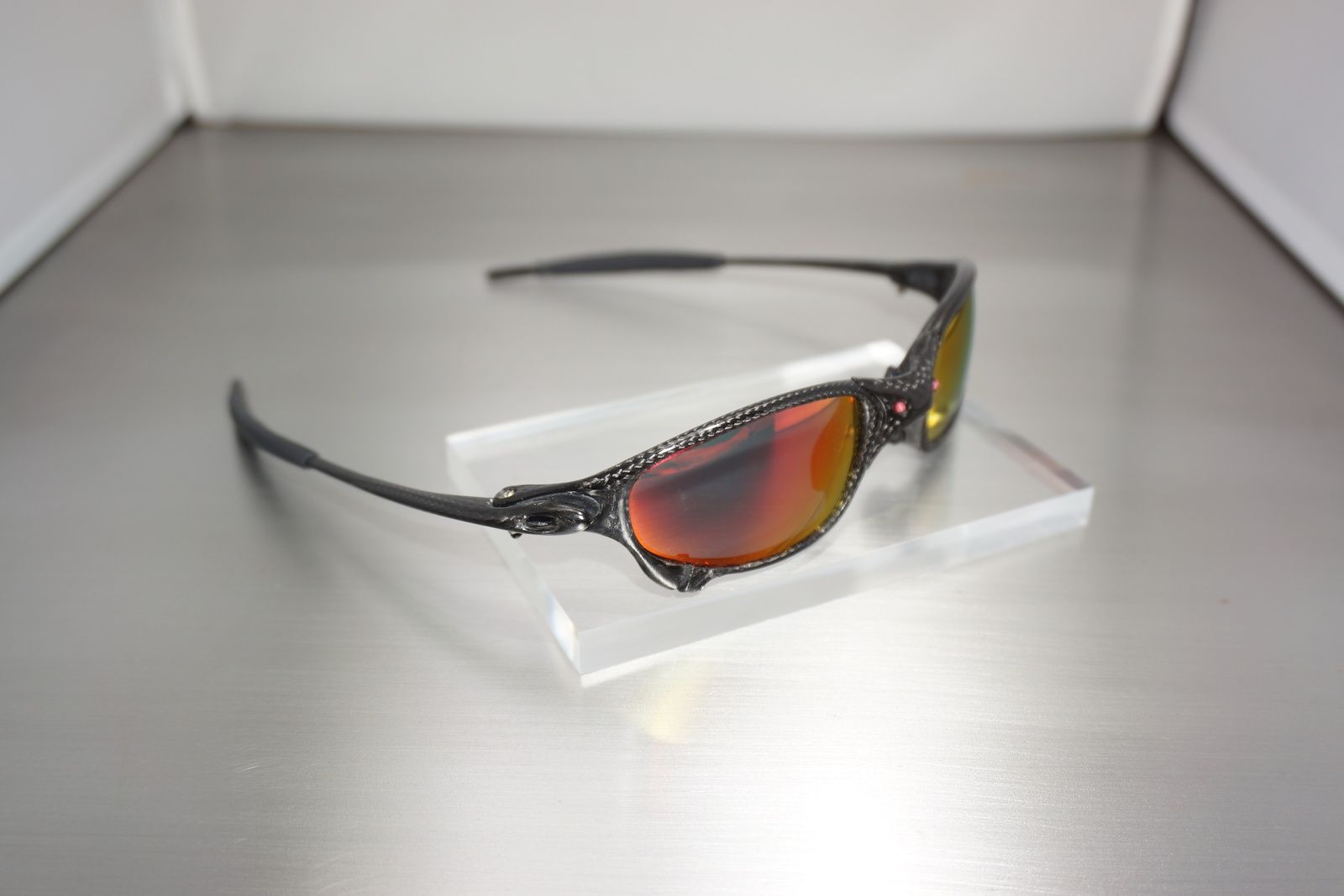 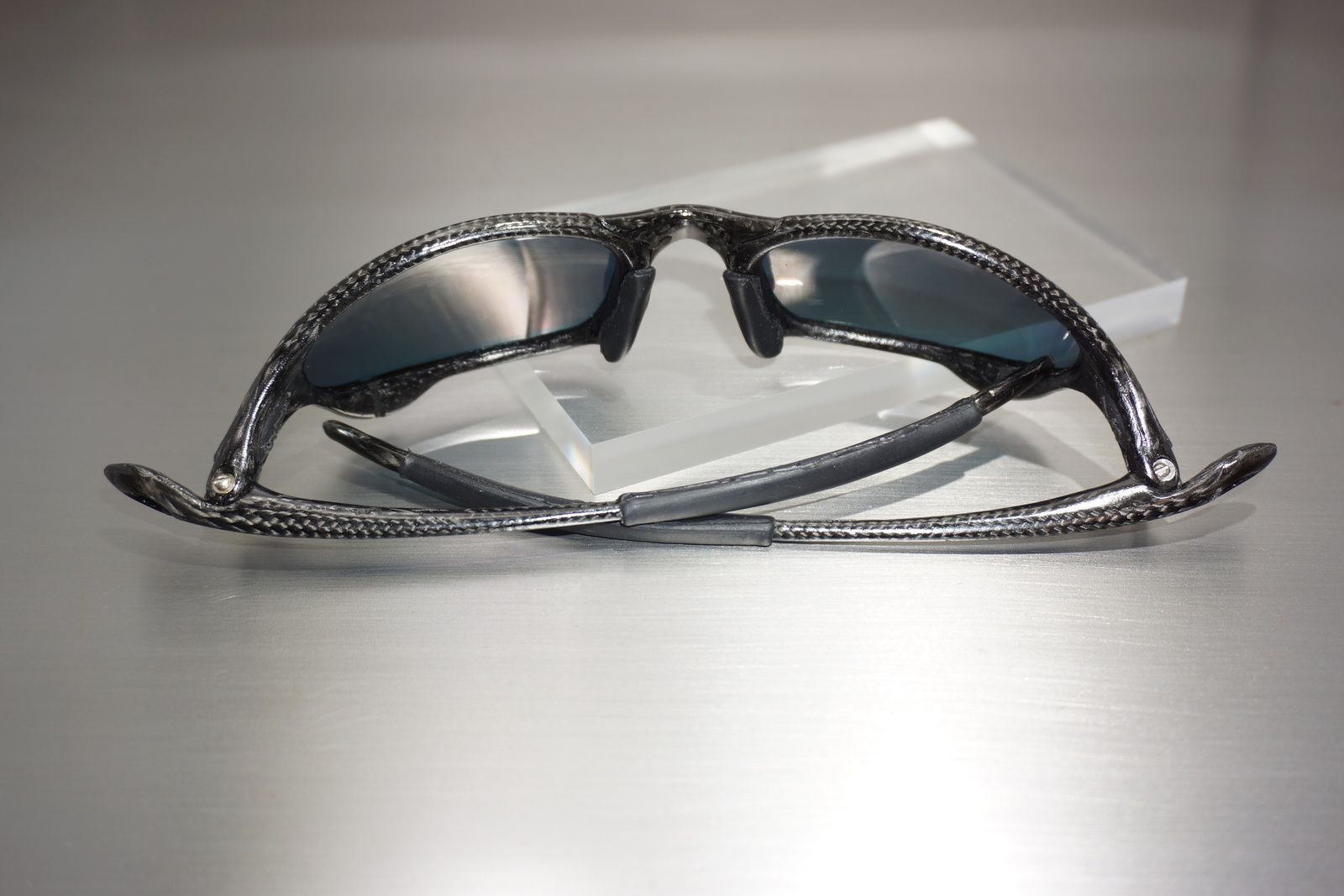 The pair that you see in the pictures have been used daily throughout the summer and for something like 6 months and they are still working perfectly, which proves that the prototypes work as I always wanted

Since creating these, I have perfected the moulds and laying techniques to further improve the strength and accuracy of the frames so that everything works as it should.

Heh heh, of course, I now have my eye on the Romeos, although I have no idea where she put them....yet.

My apologies for lots of photos on this post, hope its not a problem.

On the way back!

Outstanding job, really interested and wondering if you would produce more for members to acquired them

Best Custom work Ive ever seen on Oakleys.. Better than the original?? By Far. Oakley should be worried and why the heck didn't they ever do it in the first place???

Amazing job there. I know Zach has started a set as well. Very unique. Tons of talent there

Amak.2DK said:
Outstanding job, really interested and wondering if you would produce more for members to acquired them
Click to expand...

Cool, thanks @Thx515000, @Amak.2DK , @Wavecloud , @SFFrog - I'm real excited to make some more of these, I have improved my techniques and learned lots.

Wavecloud said:
Im first in the queue...?
Click to expand...

Is your getting allot of interest, I guess @Wavecloud is can be second queue, because @Thx515000 mention "I like it a lot" refer to first in line .

Anyways if you have plans to make them to supply for O-Addiction members, let us know. I'm sure @SFFrog @YakuzaFloralGangsta @onz @Wesleypipesyo @Joshua Hanson @Linegear Japan @BigRabbit would like one for their collection.

Wow, I never actually thought anyone else would really be interested in these, I've had them on the workshop bench for the best part of a year and eventually got them to a good point but never thought that anyone would really like them.

I am going to make some more and I will keep you all posted on progress... and eventually when I do get my hands on the Romeos, I plan to create a Carbon Fibre version of those too

Thank you for all your kind words ... much appreciated