I've gotten genuine oakley lenses in my frames a couple times before via Lenscrafters, and before that Framesdirect, but I've always used frames with a relatively flat base curve. This is my first time getting everyday glasses in a 6-base frame, so I ordered them directly from Oakley since I figured they know their frames and lenses best.

Previously with some wrapped frames (non-oakley lenses) I've had moderate to severe fishbowling issues (though I think the worst of it was from inaccurate PD measurement, previously I had been given lenses with a PD as low as 62, the last time I was at lenscrafters I measured 64.5 using their computer imaging thing, my eye doctor recently read me at 64, this time I rounded up when ordering from Oakley at 65. I recognize that small PD differences aren't a big deal normally, but when dealing with wrap frames it was clearly an issue for me before, and I wasn't an educated enough consumer at the time to realize.

This is the first time I've gotten documentation back from Oakley detailing the adjustments they made to my Rx to compensate for their frames. I suspect this is a combination of the Wiretap 2.0's 6-base and pantoscopic tilt compared with a normal frame. Whatever they did, it worked out well. I can tell I'm going to have a very slight adjustment period for the new progressives, but they're quite comfortable, no fishbowl effect, no noticeable distortion.

I wonder if these adjustments are the sorts of things I could have expected if I had gotten my lenses done elsewhere? I got the 1.59 OTD Advance Plus progressives. 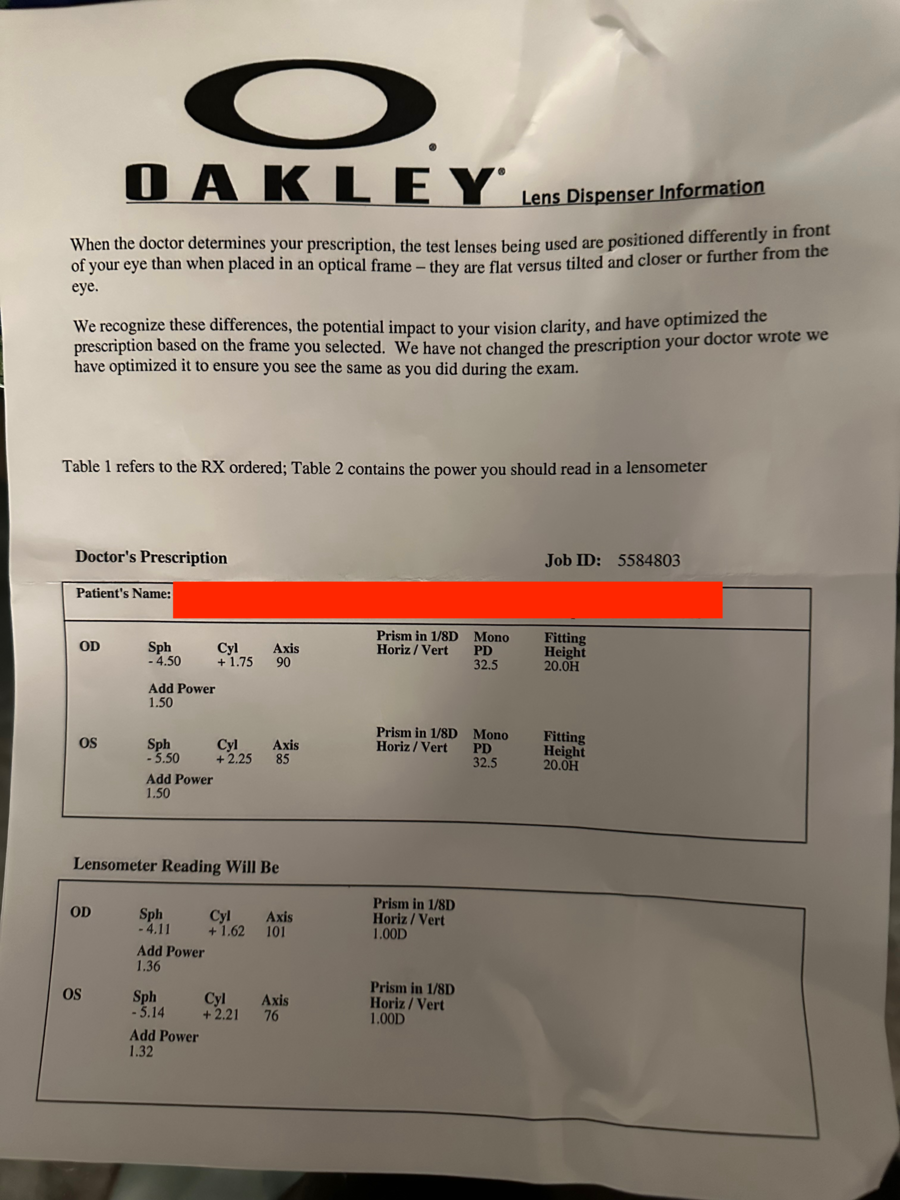 These adjustments are digital optimization to minimize distortion in high wrap frames. They also take into consideration pantoscopic tilt and vertex distance, like you said. You probably had issues before because the RX technology for wrap frames just wasn't as good as it is now. Oakley RX wraps are hi tech lenses, it amazes me what kind of prescriptions they can put in 6 base, even 8.75 base curves

When ordering progressives how's it done?