OEM Lens Etching Over The Years

Got bored today and started going through my collection and thought about posting the various non-custom, non-one-off etched lenses that were available to the general public either via Brick and Mortar (Including OPDs), Online or Catalog over the years that are in my collection. With O-Review as reference for the product release time line, let us begin!

Here is what I have from Oldest to Newest: 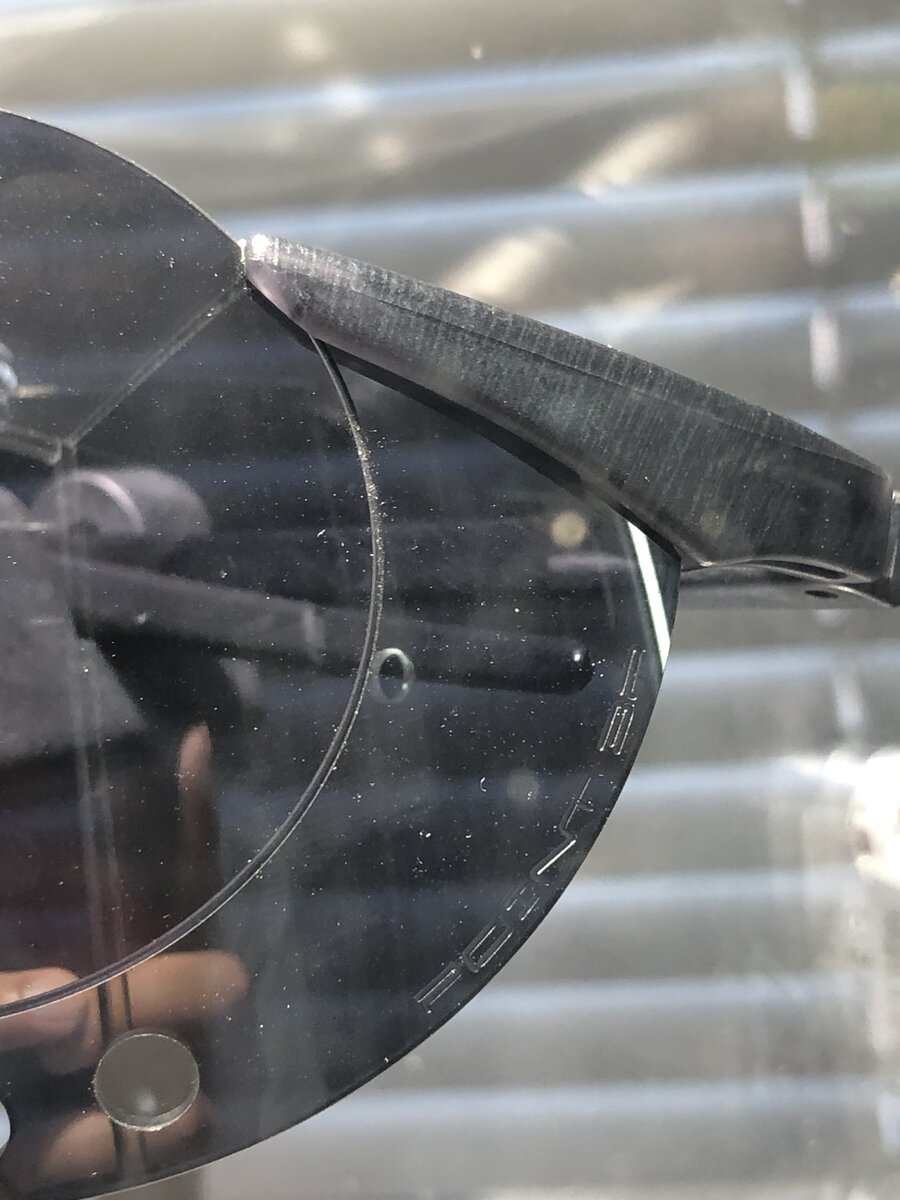 The lens on the 0.2p is pretty scratched up but the 0.3p is close to mint. I love the stretched font styling and the effort Oakley put into having the text follow the curve of the lens. 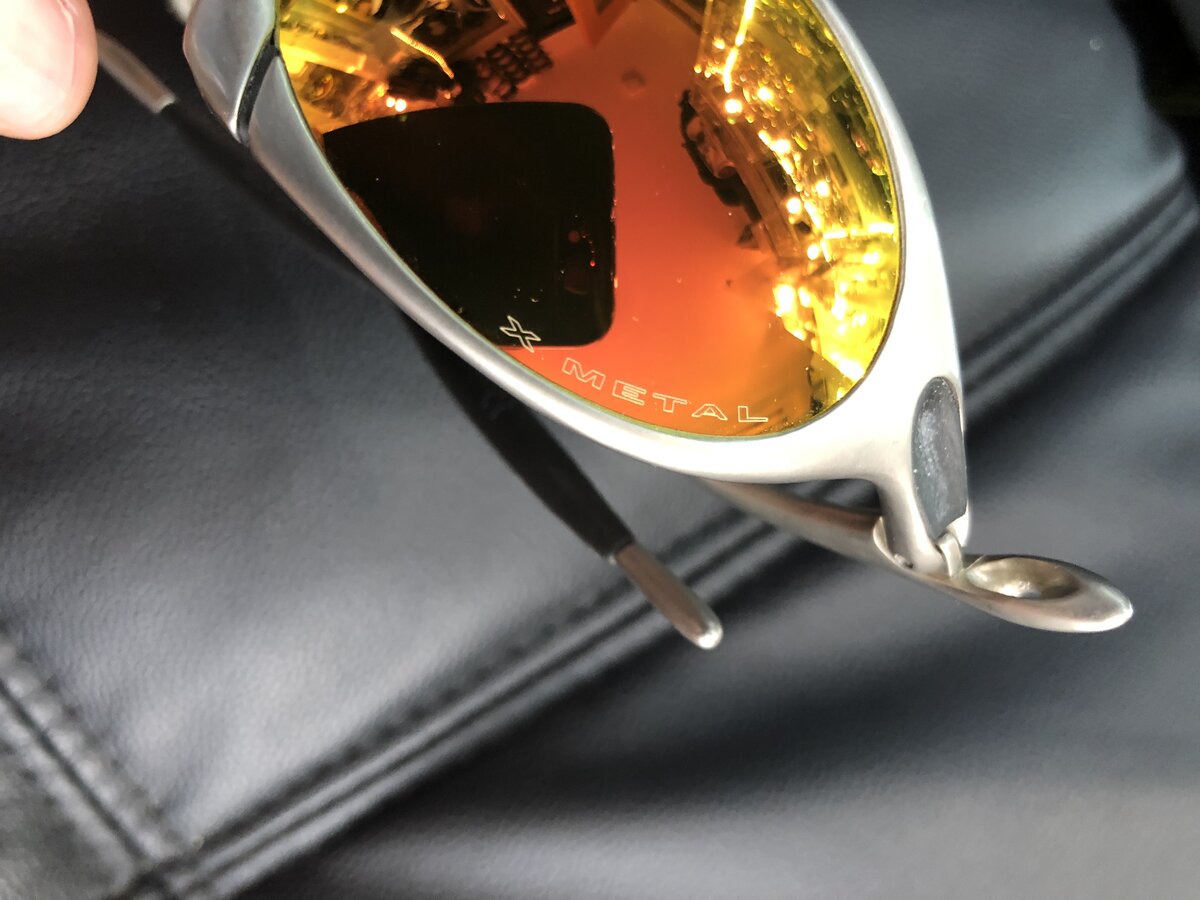 With the opportunity to add a low serial Romeo MJ LE to my collection, I could finally compare the difference between "older" (top) & "newer" (bottom) X METAL etching. Personally, I prefer the newer, cleaner version. This goes to show improvements in laser etching technology with the finer resolution that Oakley has achieved on their later products. 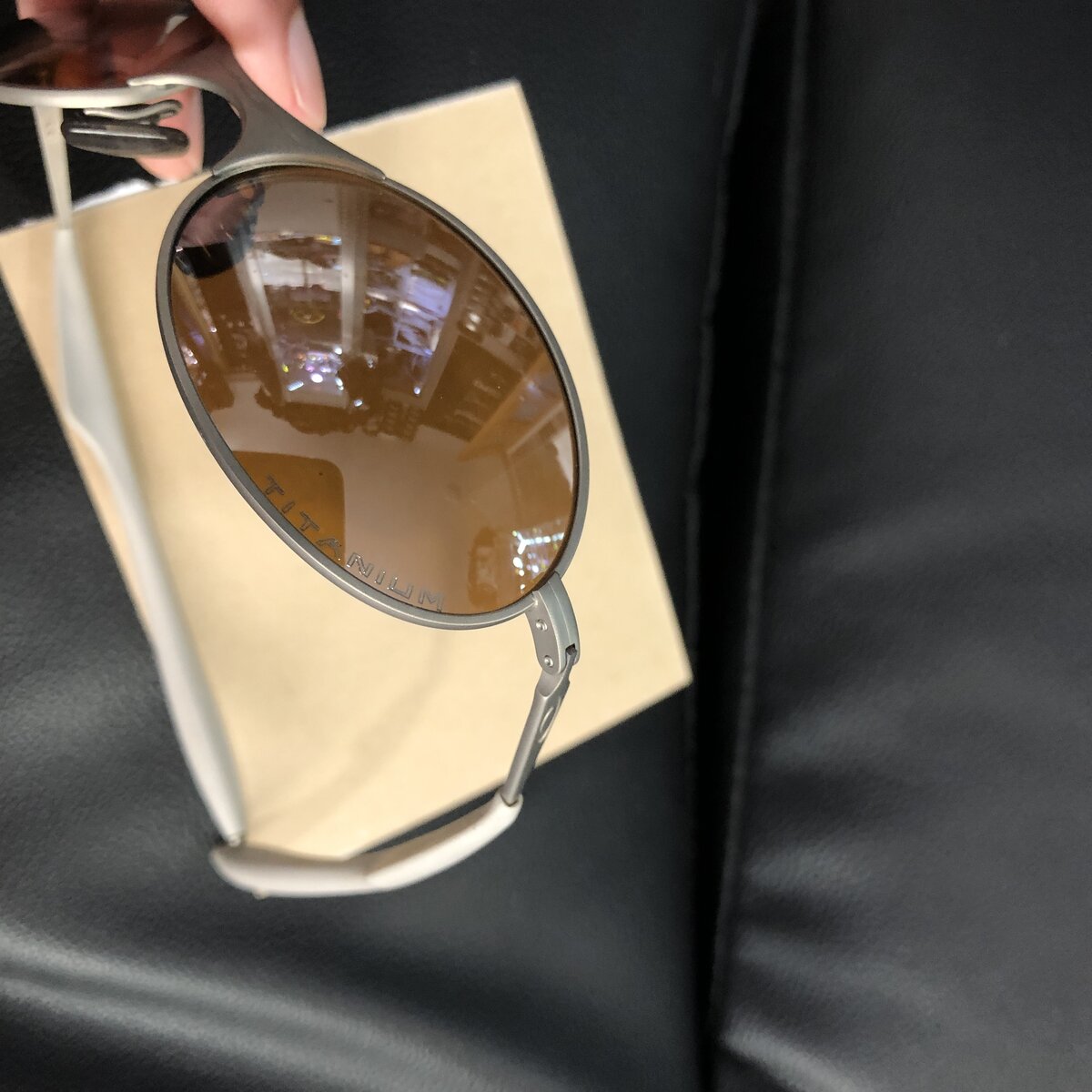 My first pair of Oakley sunglass was the E Wire. Couldn't afford the T Wire back then but always liked how cool the word "Titanium" was etched not only on the lens but also on the back of the nose bridge. Fast forward many years later, I was finally able to add one to the collection. The OO came in a handful of lens shapes and had an awesome box art featuring Michael Jordan himself. I like how the frame is subtle and the subtleness is also transposed to the barely visible ellipse "O" etched on the bottom left lens. 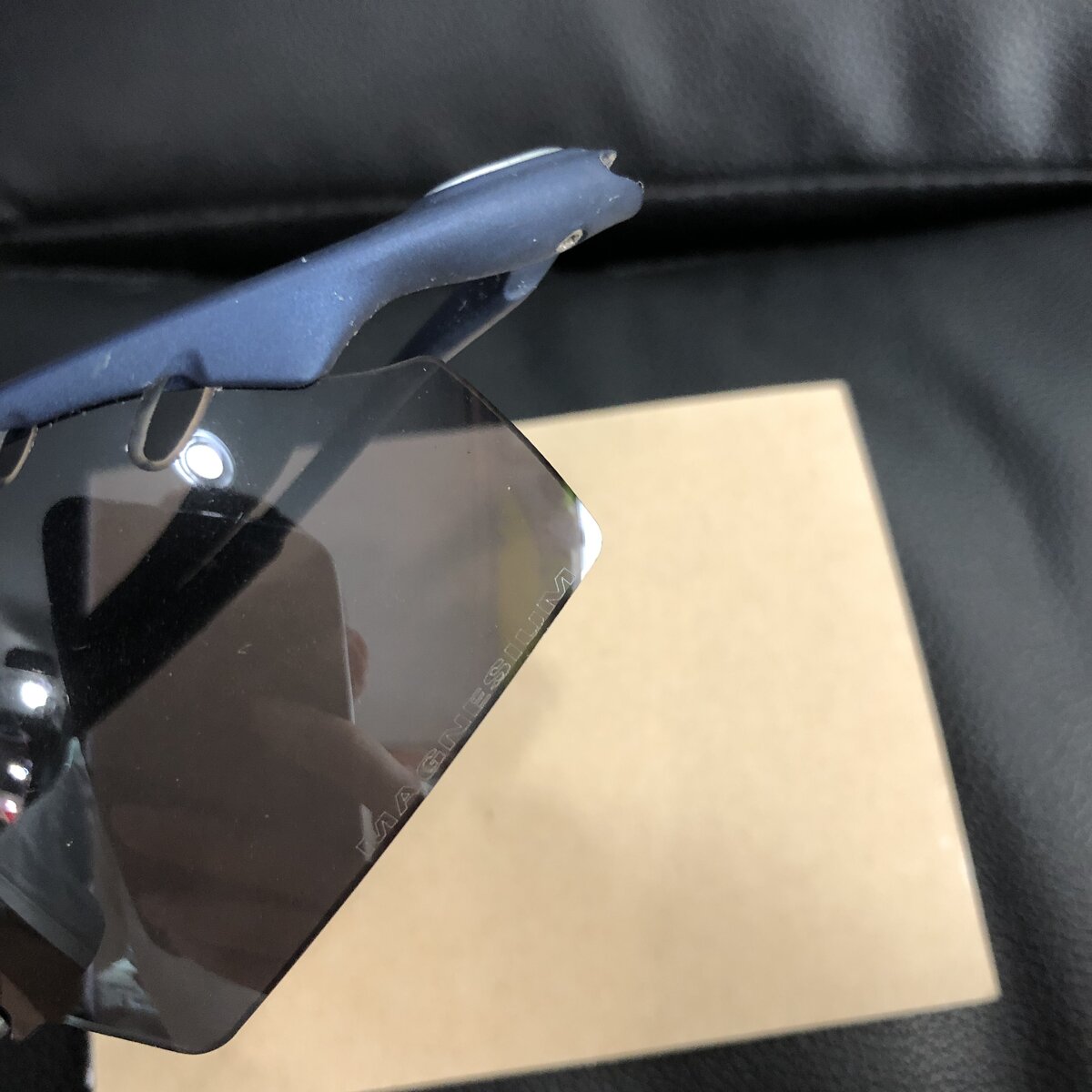 The Magnesium M Frame was a breath of fresh air as far as frame materials go. After years of seeing C5 and X Metal alloys in Oakley's promotional materials, a new frame material was finally introduced. The yellow box it came in even has "WARNING: MAGNESIUM" printed on it which I thought was pretty badass. Too bad there were so much coating issues with this material that it got discontinued fairly quick. 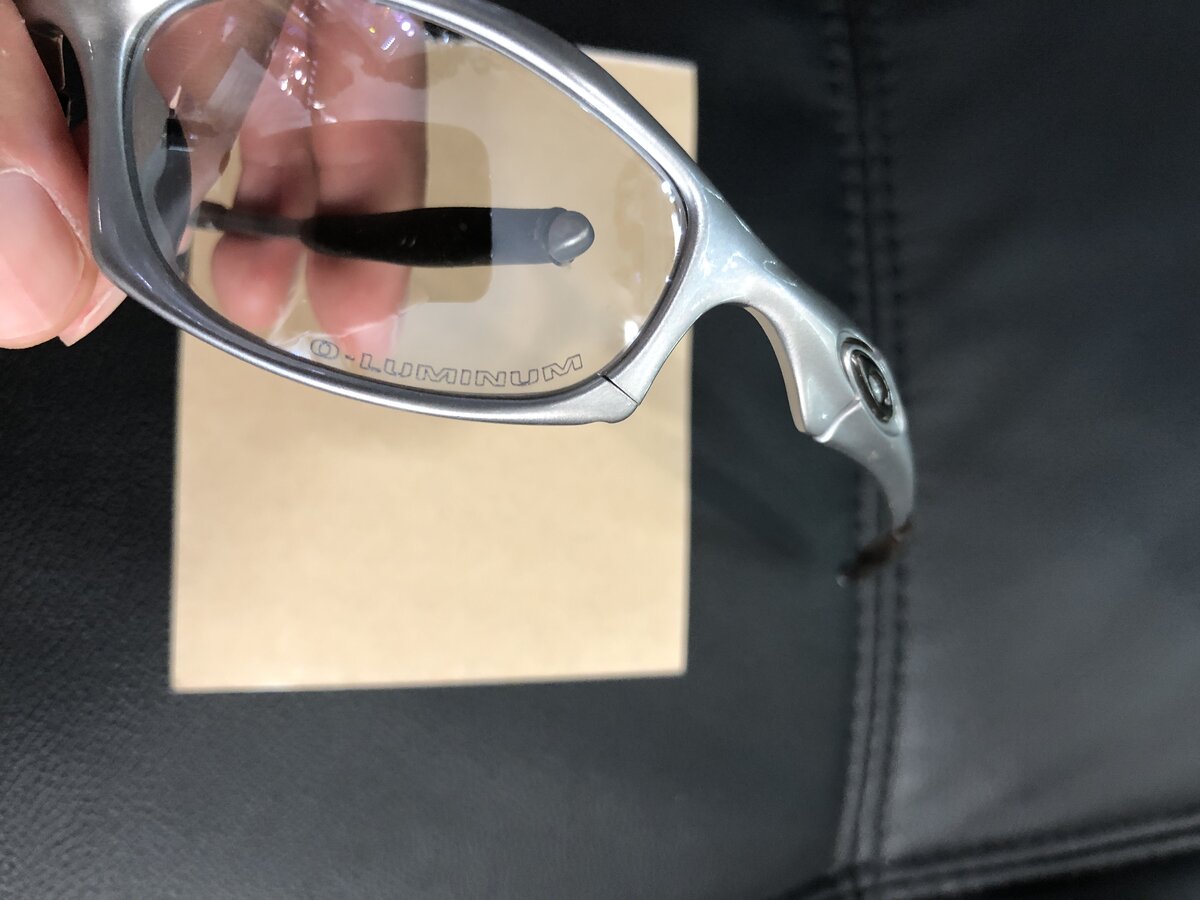 While we are talking about new frame materials, Oakley introduced aluminum as a new frame material. Aptly marketed as "O-Luminum" the hatchet wire became one of my favorite pair to wear, specially in the office. Co-workers thought I had RX glasses on thanks to the Titanium Clear lens. 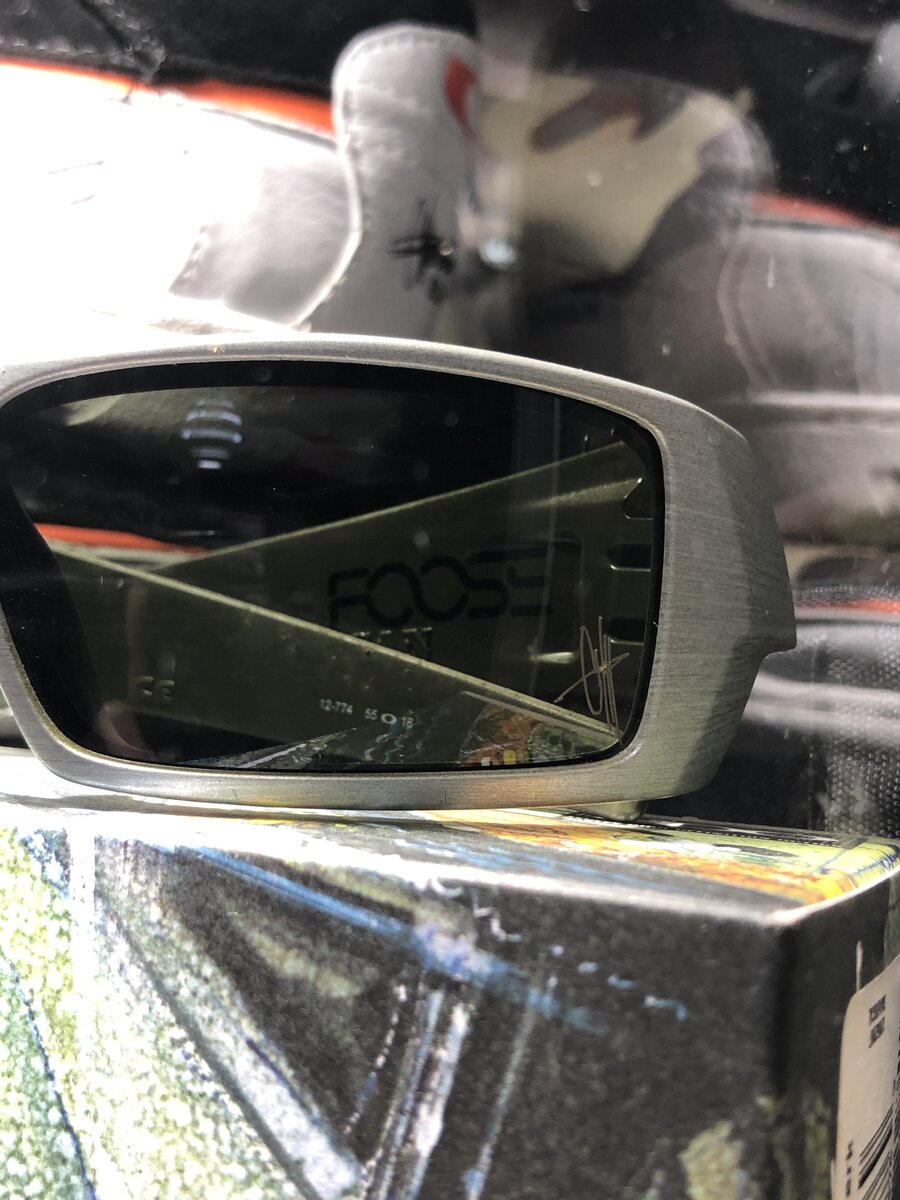 Hot Rod Guru Chip Foose found his way into a collaboration with Oakley. Inspired from his P32 rendition, the Gascan with Brushed Aluminum finish was born. This pair featured his signature etched on the left lens. The box art is display-worthy, at least for me. Love the matching micro bag as well. 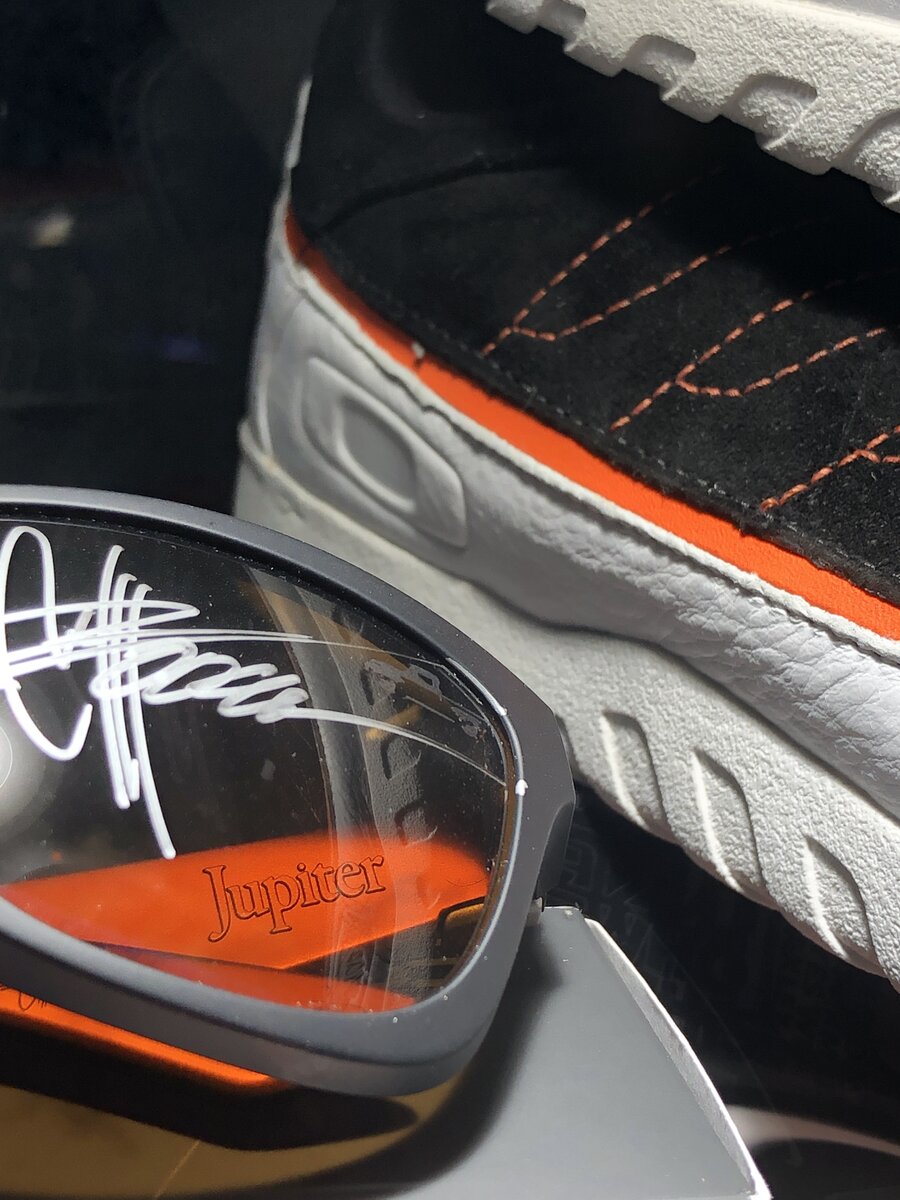 As a follow up to the Gascan, the frame of choice this time around was the Jupiter. Drawing inspiration from his FD100 truck design, this pair features the FD100 truck itself etched on the top portion of the left lens. The placing of the etching was pretty unusual at the time which made this pair standout. I had asked a huge favor from my cousin attending the SEMA Show in Las Vegas and have him line up for me to have this pair signed. 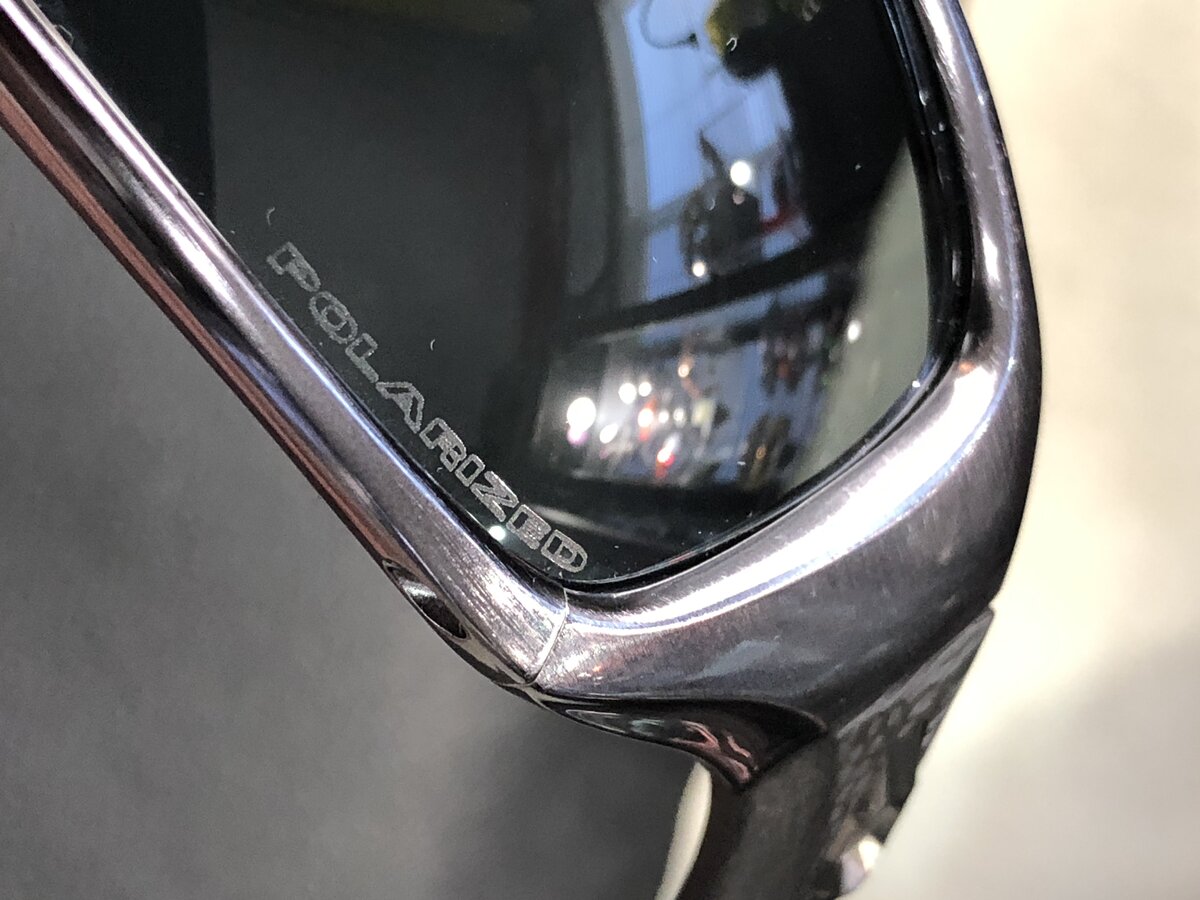 Purchasd in December 2009 at the San Francisco Market Street O-Store, the POLARIZED is perhaps the most common lens etching in anyone's collection. Back then, most polarized lens were also iridium coated so having the aluminum c-six come with a boring non-iridium grey lens was a disappointment. Every other pair in the Elite Line had Iridium. 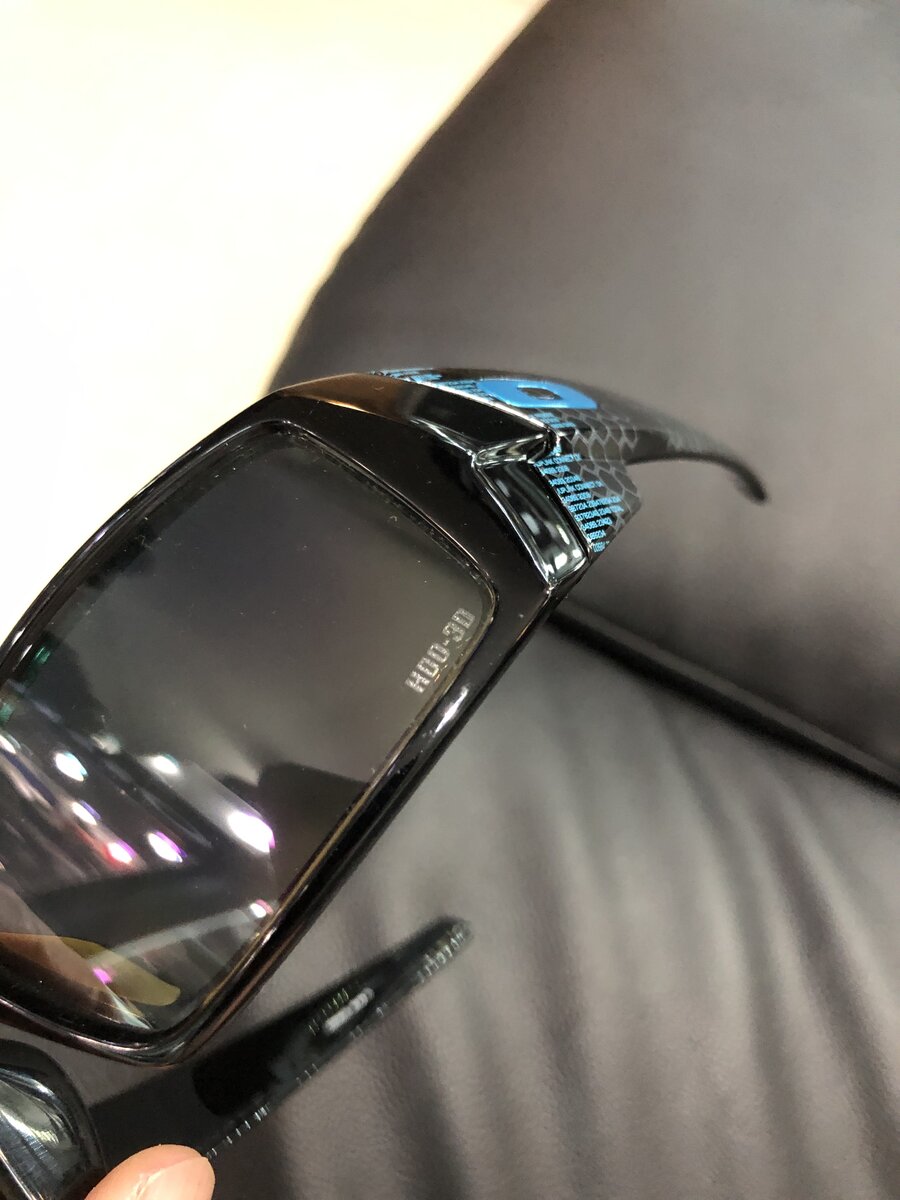 Back when 3D TVs was getting popular, Oakley came out with a total of 6 production version of Gascans equipped with their proprietary passive 3D lens and marketed the lens technology as HDO-3D. I did see Tron and Transformers with both the Tron and Transformers glasses and both times I went home with a headache. LOL. 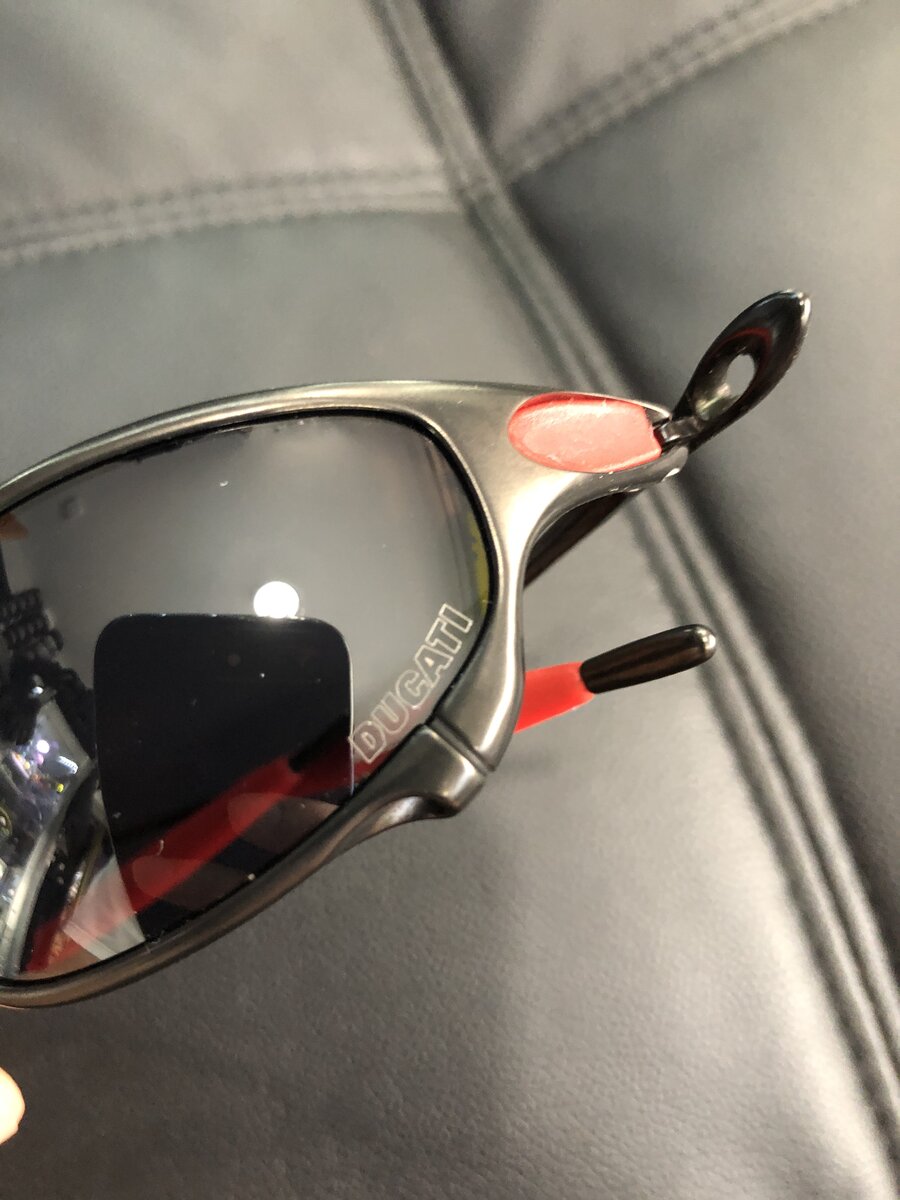 The collaboration between Ducati and Oakley brought forth the popularity of the black and red color combination. This pair of Juliet is only one of two Ducati collaborative pairs in my collection. The other is a Ducati Hatchet. 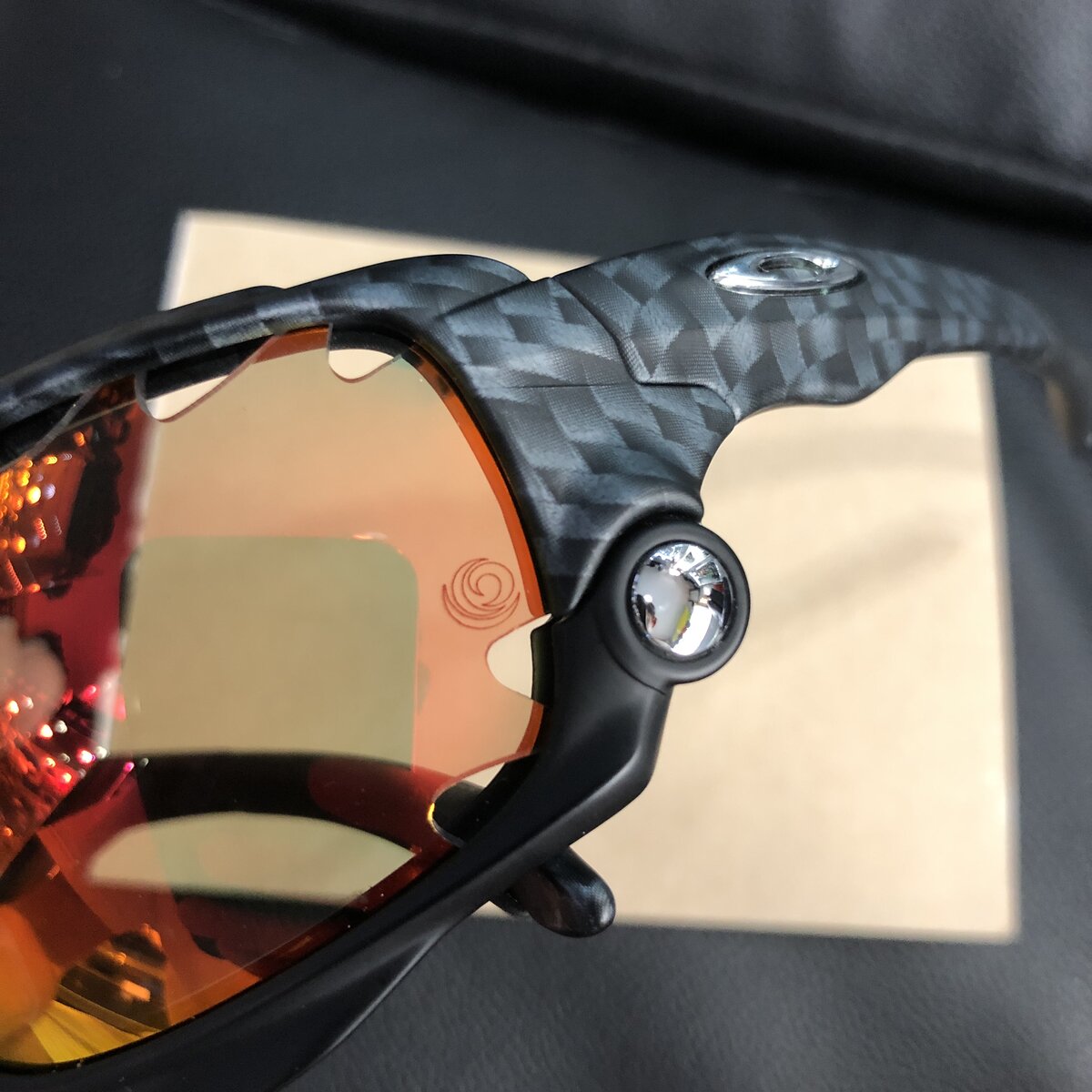 Conceived to commemorate 2011's Tour De France, the Echelon Jawbone's ballistic case has a 2011 plate attached to it. What makes the pair cool is the unusual VR50 Ruby Photochromic lens. This lens also features the SOLFX / Transitions Logo. 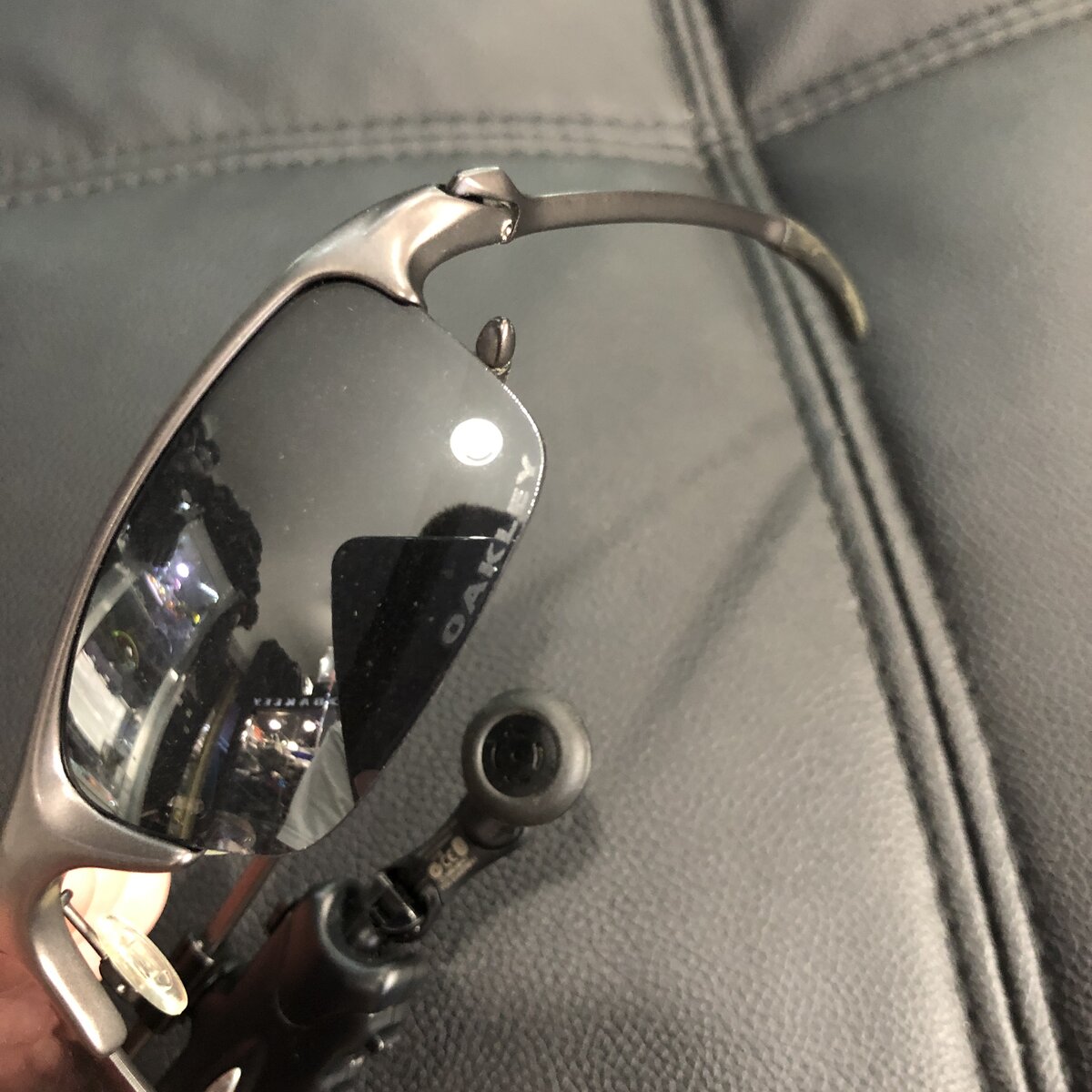 Trying to rekindle interest in wearable electronics, Oakley and Motorola collaborated on this pair. With Motorola's highly successful RAZR flip phone, an iteration of the moniker found its way to one of Oakley's eyewear. My set featured the bluetooth module developed by Motorola has both Oakley and Motorola's branding. The aluminum pill case is also co-branded with Oakley's ellipse one one side and Motorola's logo on the other half. For me, the most notable feature of this pair is the entire word OAKLEY being etched to the lens. This normally happens on the nose bridge using the thin stretch line font but in this pair's case, the font resembles the one used on the foundation logo. Very unusual. 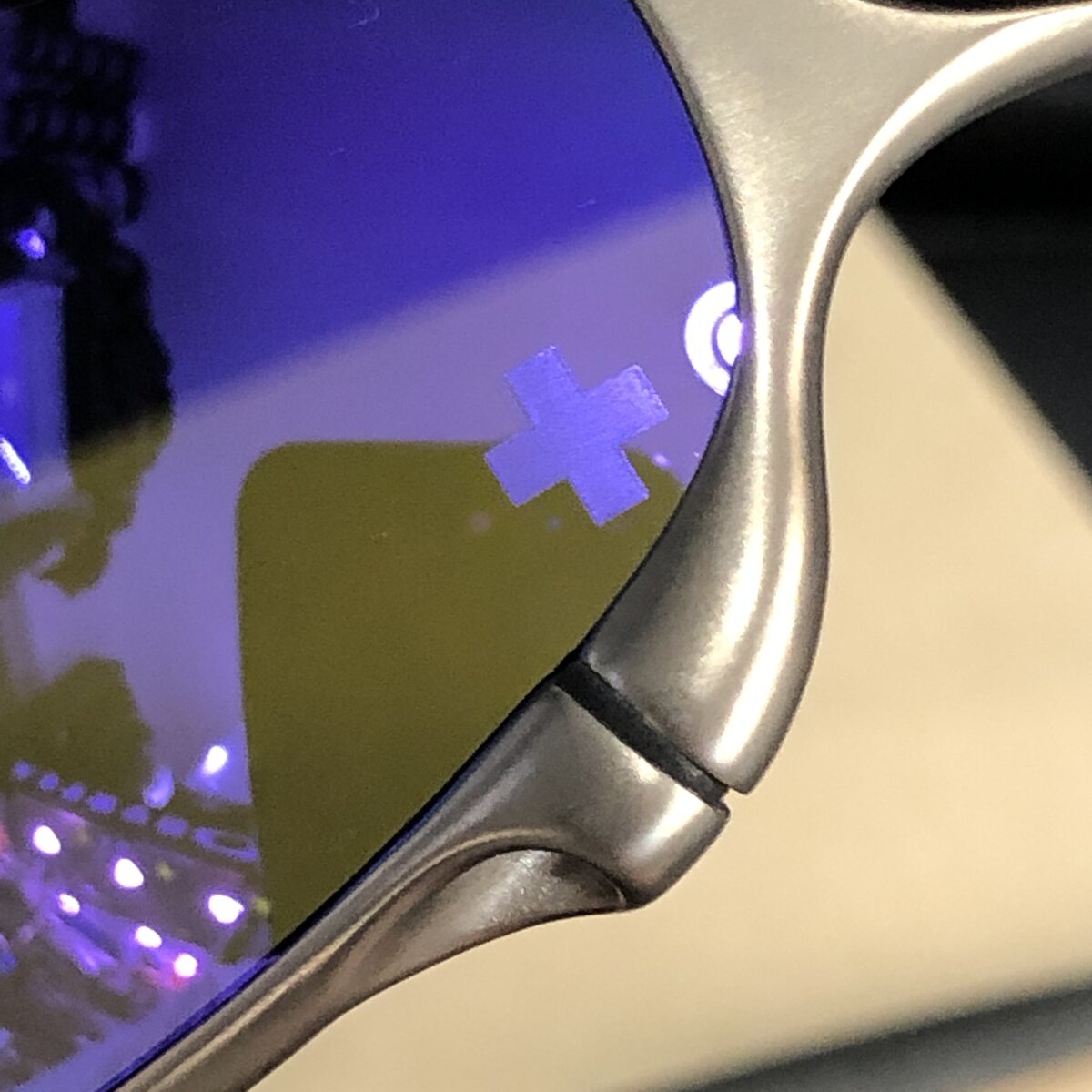 One of the more meaningful and charitable Oakley collaborations, the Infinite Hero line features a cross etched on the left lens and mostly has some shade purple in its color way. I love how a percentage of every Oakley Infinite Hero product goes to the foundation. To the brave men and women of the armed forces both past and present, we thank you for your service. 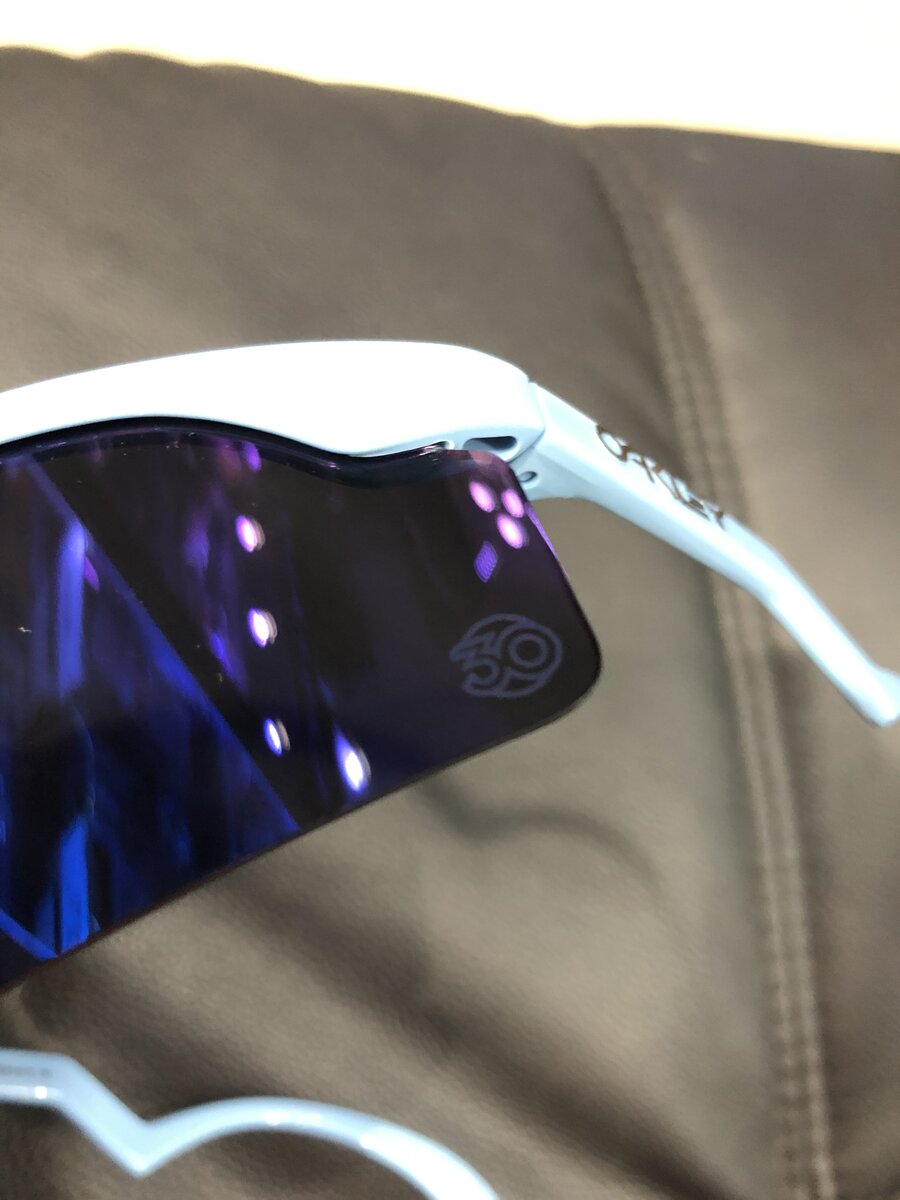 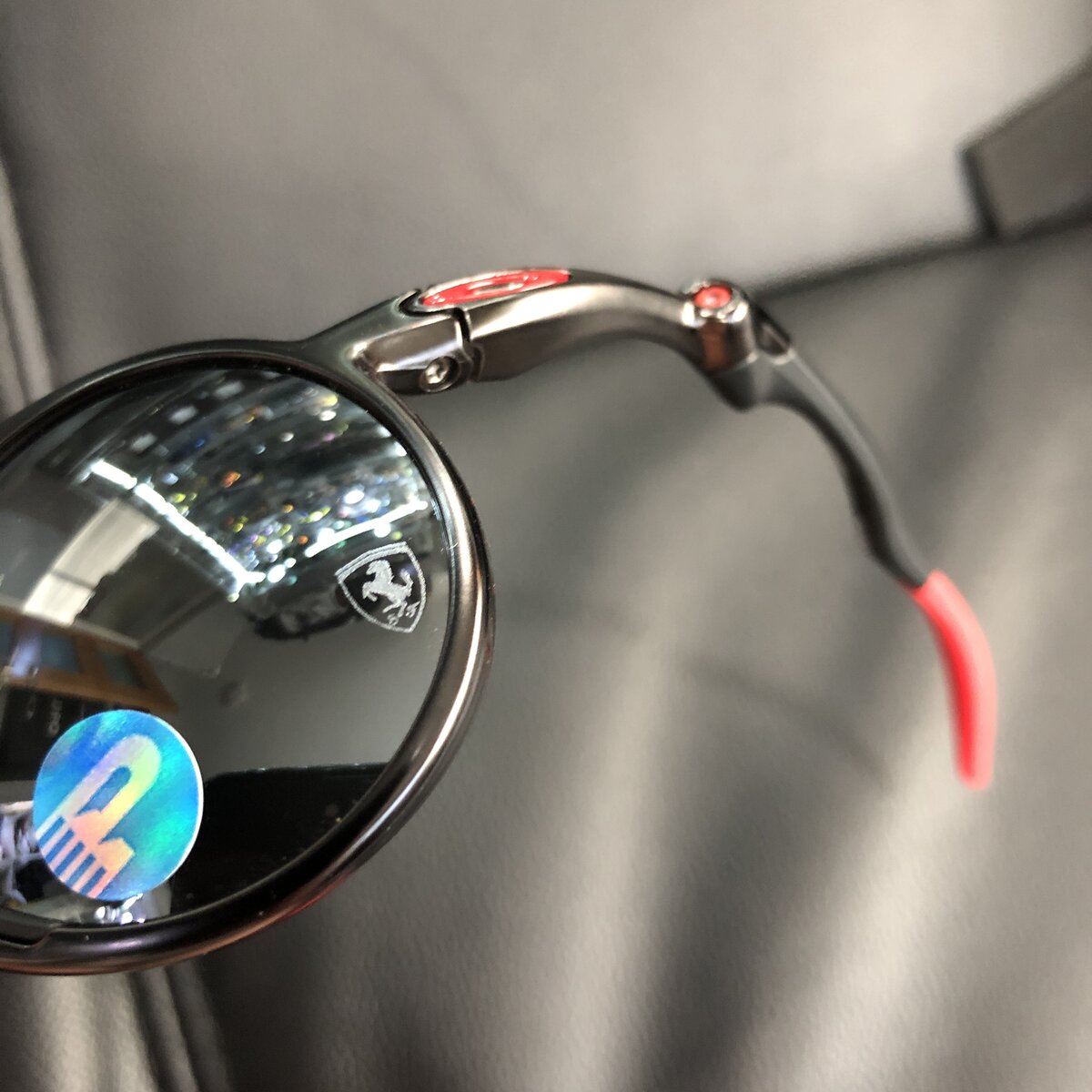 When the collaboration with Ducati ended, Oakley partnered with Ferrari to continue the performance motorsport inspired eyewear line. With this partnership came the Scuderia Ferrari logo etched on eyewear under this collection. Most of the eyewear sported the black/red color way that gained popularity during the Ducati era. 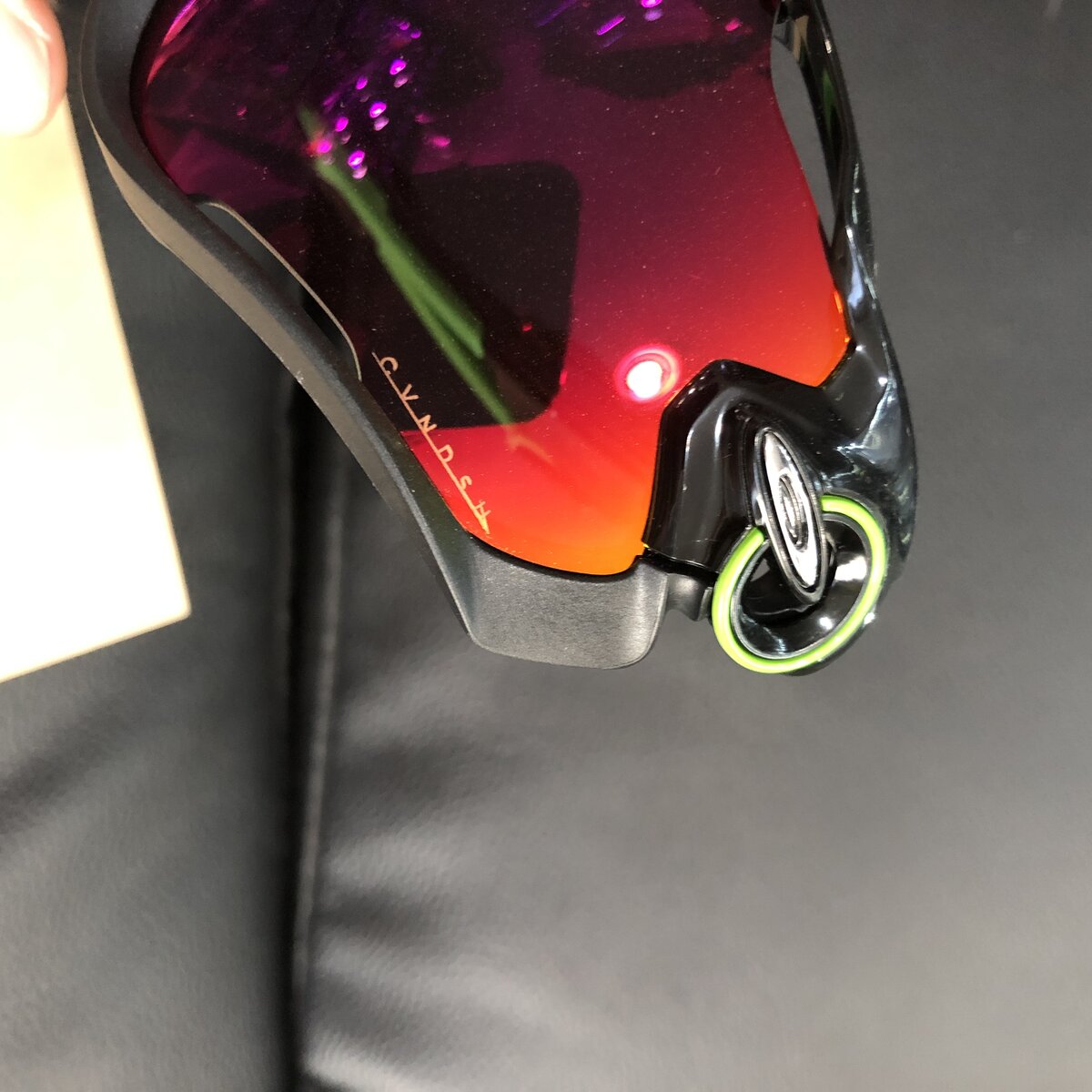 This Signature collaboration between Oakley and Pro cyclist Mark Cavendish resulted in this Jawbreaker that features Cavendish's branding etched on the lens. The eyewear also came with a matching Cavendish microbag. Looks like Oakley has their own photochromic technology mastered, especially after being acquired by Lux. Unlike the older photochromic lenses of the older Jawbones and older generation Racing Jackets that sports the SOLFX / Transitions logo, the newer Oakley photochromic lens simply has the word "PHOTOCHROMIC" etched on them. 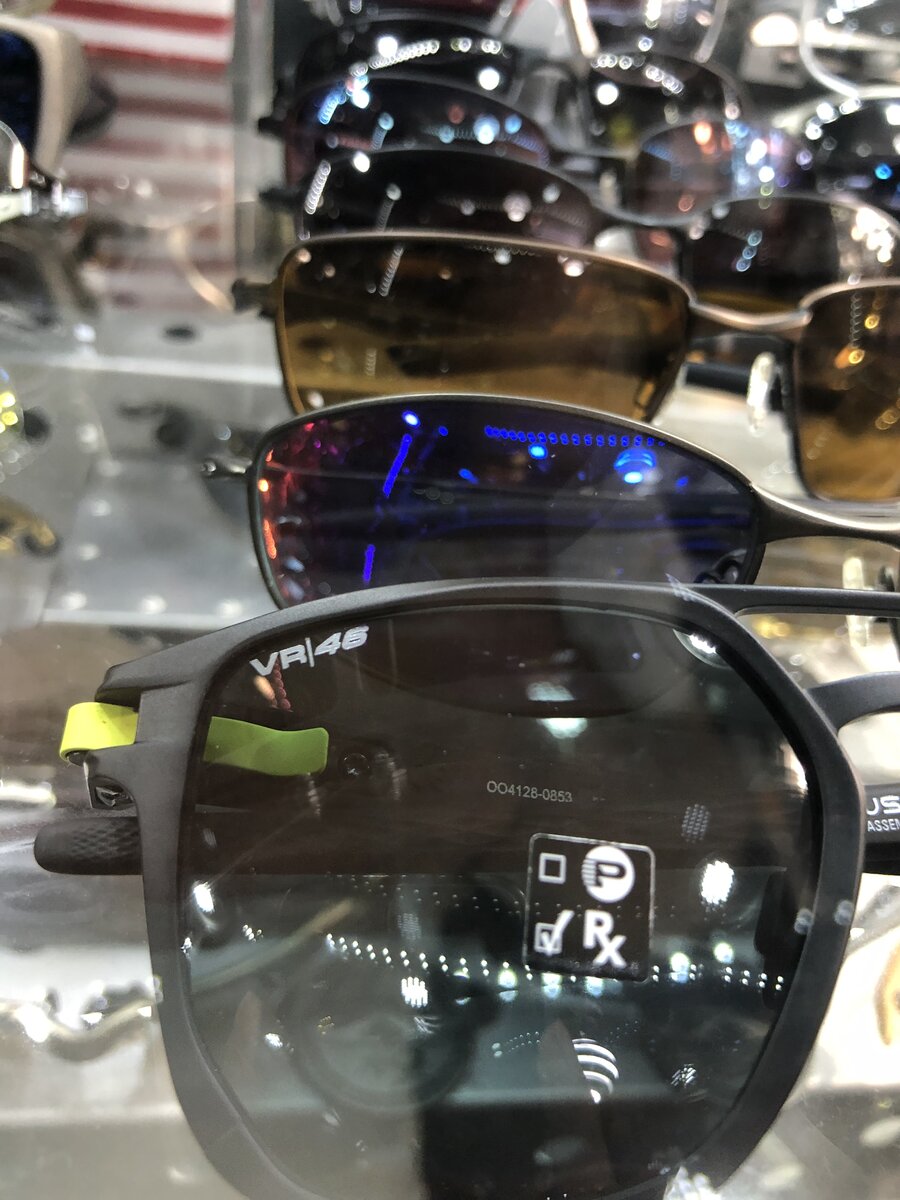 In a break away from tradition, etchings are now starting to appear on the right lens, and on the upper portion too; almost like a complete opposite from how traditional etching placement was. This is observed in this Latch Alpha I have which features Rossi's branding. Laser etching may become a thing of the past with the introduction of TampoPrinting as seen in this Holbrook that features the San Francisco 49ers logo "printed" across he entirety if the right lens and then a small logo of Super Bowl LIV and 49ers on the bottom right. More of a novelty, I am not sure how long the print will stay on the lens. Will it fade over time? Who knows... I guess time will tell. There is also a Kansas City Cheifs version and both are still available on Oakley.com at the time of this post with and extra 30%. 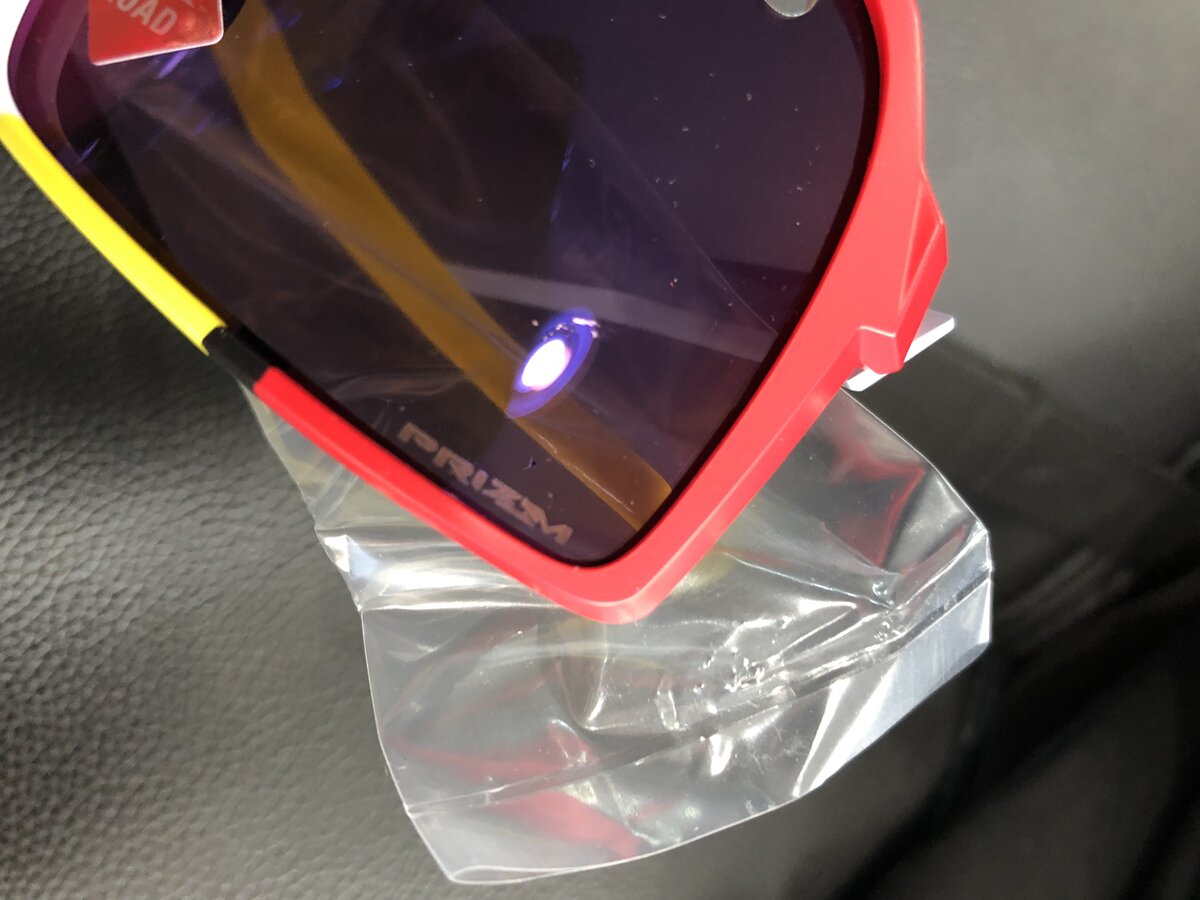 Perhaps the most common etching on all recent eyewear is the Prizm etching. With very few exceptions, almost all sunglass made now bear the PRIZM etching. The placement is so random now but it will be somewhere.

It's a weird set. I never knew it had an etching until I saw your picture. Btw if anyone has the matching microfiber bag I would like to buy it

If it can’t be customised, I can customise it!

The effects of Covid19 lockdown lol.

Here are some Honorable Mentions in my collection: 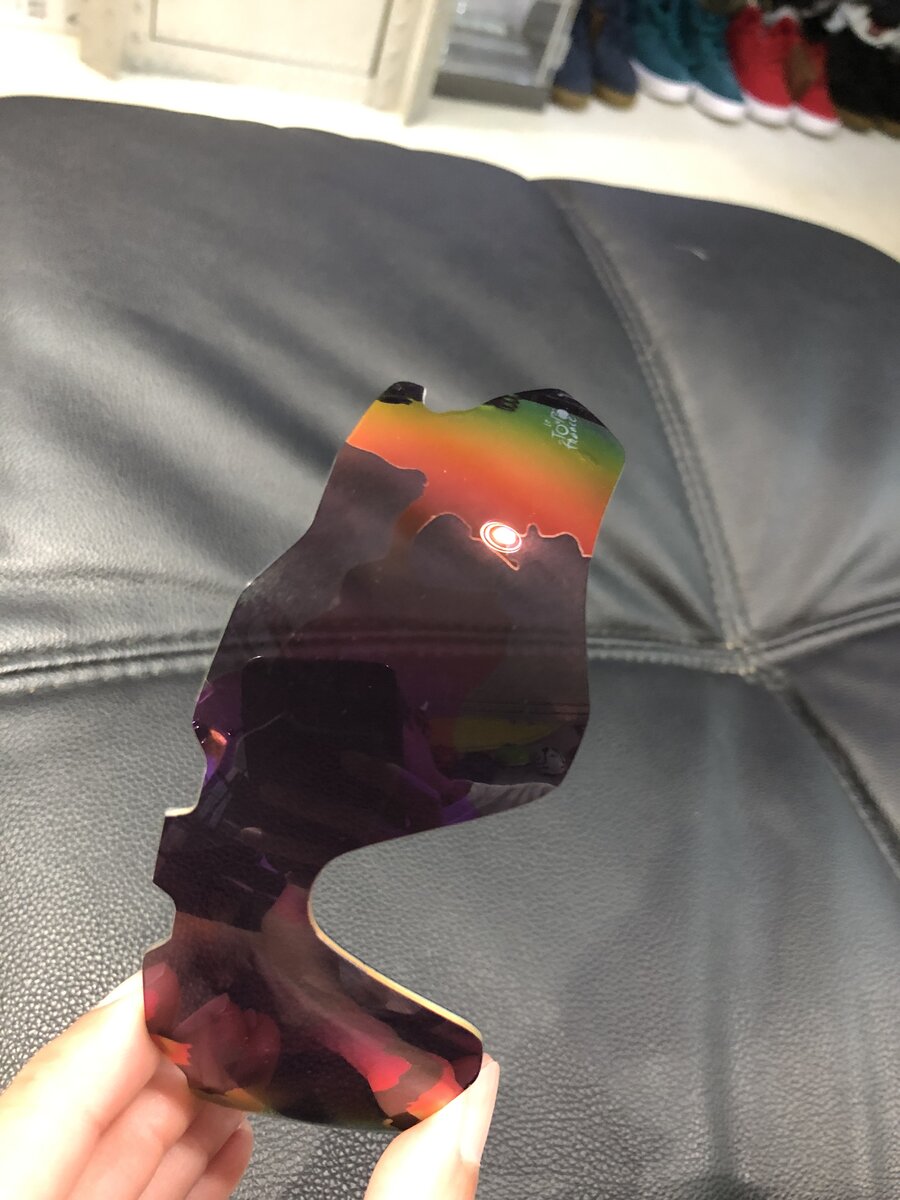 Oakley celebrated TDF 2017 with a Radar Pace that featured a groovy lens depicting the map of France. Perhaps a precursor of the TampoPrinting technology we have seen on the NFL AFC and NFC championship Holbrooks, it is nice to look at and when looking through, one will not even notice the lines and curves. Lastly, the TDF logo is etched on the bottom left corner. Another TDF exclusive, this year's iteration features laser etching on the "frame" itself. The shield design of the EVZero makes the frame a blank canvass for stuff like this. Hopefully we will see more creativity in the future. Again, the TDF logo is etched on the bottom left side of the lens.

Tomtucker said:
i never thought they made a lens with the "O" on it never seen that
Click to expand...

Are you referring to the Jordan OO wires? If so, then Yeah, it's pretty unusual which makes this line quite unique. Here is an example of each lens shape all brandishing the tiny ellipse etched on the left lens front to back
(OO, OO A, OO E and OO Square)

Hed568 said:
Are you referring to the Jordan OO wires? If so, then Yeah, it's pretty unusual which makes this line quite unique. Here is an example of each lens shape all brandishing the tiny ellipse etched on the left lens front to back
(OO, OO A, OO E and OO Square)
View attachment 723827
Click to expand...

yes, actually you would think oakley would have put the O on all thier lenses from the start up until now, like other brands put their logo on things, i mean, who could imagine a Nike item without the swoosh .......

but oakley went the exact opposite way and removed the O very quickly, only very few models/lenses have the O, right?