PS: Will likely create a separate specific thread in the appropriate location for the Juliet, but for now I'm batching this listing but can provide additional details on each item as needed.

All prices include USPS Priority Insured shipping within the US (would prefer to avoid international shipping if possible). Numbered in the picture to help match it up to the description, # followed by a letter means they're an included part of the # being sold.

For the most part, prices are negotiable and may consider trades (especially if you happen to have a warmer X-Squared lens, or the NXT Pinky Gold photochromatic). I've also been wanting to see what older wires are out there. Longer term goal of course is the X-Metals (preferably x-metal finish, and aiming at XS, XX, or R1). 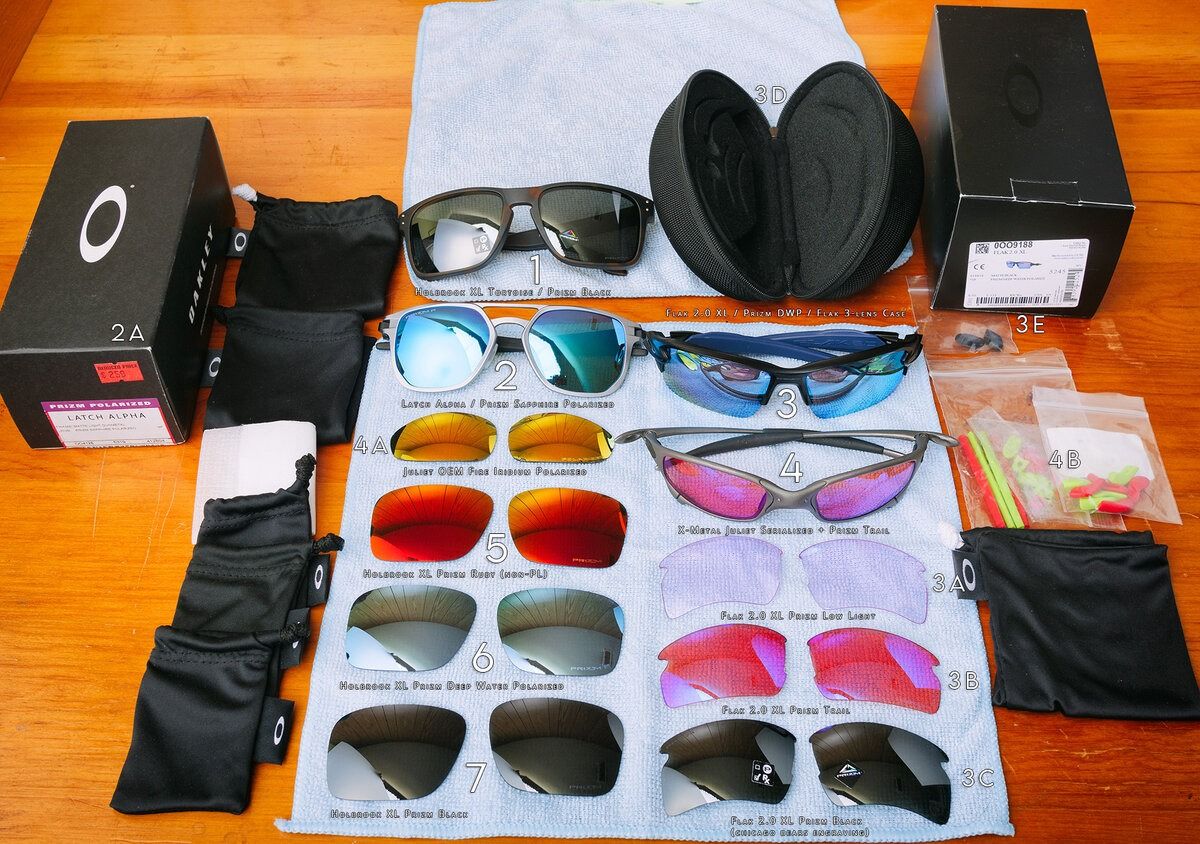 Originally got as a third Holbrook XL to house additional lenses, but haven't been using it much at all since more recent acquisitions. So I'm keeping my Woodgrain and Kokoro and getting rid of this extra Holbrook XL. Was housing Shallow Water in it since I got it, so the Prizm Black they came with have never been used outside of remounting them for this listing. Includes microfiber bag.

I like the way this one feels and looks, but I am not a big fan of the Prizm Sapphire lens compared to my preferred warmer lenses, for many it'll be a good neutral tone look thru the back. Includes microfiber bag, original box, and if desired a hard case with the black/white US flag "O" on it that has a felt-like exterior.

This unit originally had black ear socks, I purchased a Chicago Bears pair and put the black ear socks and Prizm Trail Torch on those. So these are the original colorway with the exception of the now blue ear socks (which matches better to the deep water lens in my opinion). Included are the Prizm Black (11% VLT Grey, Chicago Bears engraving), Prizm Deep Water Polarized (12% VLT Rose), Prizm Trail (36% VLT Rose), and Prizm Low Light (75% VLT Rose). Includes the original box, and also includes a Flak style soft case which can house the frame plus two loose set of lenses. I would prefer not to break the set apart, or if I did, the DWP stays with the frame.

My first X-Metal, I really like the look of them however the shorter lens coverage and frame style doesn't quite fit my face as well as the X-Squared does (my nose shape pushes the right orbital up higher than the left, and with the shorter vertical coverage that can be annoying for me). So I'm selling these to fund towards more X-Squared or an XX. They come with the Prizm Trail lens cut by Chris A Hardaway, along with the OEM Fire Iridium Polarized lens I got with them (the fire iridium has some iridium coating damage on the bottom corner of the left eye lens). I'm told by the previous seller that they were tuned up by X-Man recently after being refinished to the X-Metal look and with new OEM rubbers. There's some light marks on the top of the right orbital and at the tip of the stems. Also included are some aftermarket red and green rubbers (maybe mix em up for a Christmas theme this season).

Got these originally because they looked cool and would been a good fit in my Holbrook XL Kokoro. Unfortunately I do not like how Ruby looks thru the back of the lens, a bit too green/cold for me. So these are barely used and stayed in their box after the first couple of wearings. Have the original box available.

Got these from the Manhattan O-Store as an impulse buy, primarily because I was already planning on selling my Flak 2.0 XL with the DWP. After I got some Maritime lens cut for my XS, I've grown to like those a lot more than DWP so these hardly ever see any use. Have the original box available.

Originally came with my Holbrook XL Kokoro, I don't do grey base lens usually so these were never used. No lens box available (came with a frame).

Bump with Reductions
U

If you decide to sell the Juliet Prizm Trail lenses separately the send me a message, bro.

Username Hidden said:
If you decide to sell the Juliet Prizm Trail lenses separately the send me a message, bro.

Giving it thought, also wouldn't mind trading it for an XS lens that may be sitting on since I got a frame-only one coming.
U

And if the Juliet cut trail is desired own it's own, 80 shipped.
U

Are they in tip-top condition, my man?
U

Username Hidden said:
Are they in tip-top condition, my man?
Click to expand...

Havent put a scratch or scuff on them, but I won't be able to take pictures of it removed until I return back to the house on Sunday.
U

Username Hidden said:
Havent put a scratch or scuff on them, but I won't be able to take pictures of it removed until I return back to the house on Sunday.
Click to expand...

I trust your assessment on them.
U

Bump. And just a note that I'm going to be in Pittsburgh for least a week from tomorrow, so shipping may be delayed during that time.
U

I have returned home a bit earlier and ready to ship on any purchases.
You must log in or register to reply here.

U
For Sale Spare lenses
2