Hi All- new member and new Oakley owner here. I recently bought a pair of evzero stride prizm road glasses, and while I really like a lot of the features after a few weeks of riding with them I am not happy with the prizm road lenses. Most of my riding is on tree shaded roads with dappled sunlight creating a high contrast situation. The prizm road lenses are too dark in the shadows and increase the contrast too much so that I lose all detail of cracks, potholes, etc. and can't tell if something I need to avoid is lurking in the shadows. It was so bad the other day on one poorly maintained road I had to take the glasses off.

In the past I have gravitated towards yellow lenses or clear/photochromic, but those aren't options on the evzero stride. What lens, if any, will meet my needs? I've seen reviews that say the prizm trail is no good for the road, but I wonder if that is biased towards riding on sunny roads? The prizm golf looks like it might be an option as well? Does anyone have firsthand experience with this problem and other lenses that might perform better? At this time I'm not willing to consider other frames- the frameless evzero provides great visibility over the top when I'm in the drops or on aerobars and behind when I'm checking back for cars or how badly I've dropped my buddies

Interesting you say Road is too dark. Usually the complaint is the opposite. Looks like Trail may benefit you.
S

I've come to accept that I'm not normal! It makes most reviews not very useful for me. I'm hoping at there are at least a few others on these forums with similar requirements to mine that can comment on other lens suitability.

While shredding in the woods I tend to go for Prizm Trail, don't have any complaints of them being too dark.. They're similar to H.I. Persimmon in terms of FOV tint, but with a lower visible light transmission which makes them good for type of riding I tend to do. 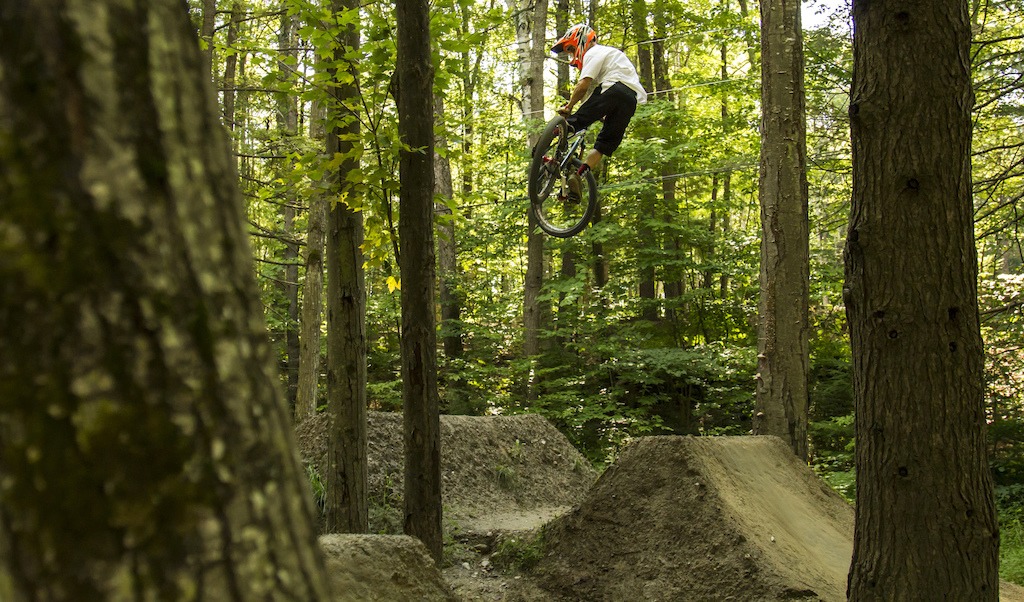 The conditions you describe are good for Prizm Trail in theory. What is the road made of, dark asphalt, or grey pavement? For Trail to excel, it requires a high contrast surface like grey pavement, but nothing extreme like tarmac or light grey concrete. On those surfaces it washes out detail because they absorb, or reflect too much, respectively. Trail is designed more for exposed dirt, rocks, and earth. It has its place, but I found it not quite versatile enough. The contrast tuning is off the charts unless you're in low light, and on a specific terrain type.

It is good that you mentioned you're under a tree canopy most of the time. I can't stand Trail in direct sunlight, it's pretty much like wearing a yellow lens, you're not provided much relief at all. I opted for Prizm Trail Torch instead because in my conditions, it's split ~60/40 between tree cover and low light, to exposed areas of bright conditions. The Torch lens flattens out its light transmission profile (LTx) to tone down the contrast in the magenta spectrum a bit, and provide a bit more cyan through to make things have a more neutral appearance, and be dark enough for brighter conditions. It's a little bit like wearing a brown lens, but the rosy contrast enhancement is still there.

I was using Prizm Road in those conditions mentioned above, but like you I found that if it was overcast, the tree covered areas were washed out. It wasn't too bad, and I'd still use it if Prizm Trail Torch wasn't leagues better. On the exposed parts, Prizm Road is better, but not by enough that I'll switch back.

I'm using Radar EV, and also use Prizm Low Light in it, depending on when I go out. It behaves similar to a yellow lens, which you mentioned you're familiar with. PLL is rose/magenta based as well, with a VLT of 75% I believe. I love it. I wear it in the rain, or evenings and it has a narrow set of conditions it's suited for, but I like it more than the non-Torch Prizm Trail.

I have Prizm Golf in another frame, and I like it for overcast conditions, and flat light. I haven't tried it in canopy covered areas, but it's versatile. I just can't say I have directly relatable experience to recommend it for your context.

Honestly if I were you, I'd revert back to my old yellow lens, or look at another Oakley frame. I assume you're riding the same road all the time, so conditions are fairly consistent. Have you tried on Flight Jacket? Its upper field of view is great for when your head is down, and it comes in both Trail and Trail Torch AND it comes in Prizm Low Light. I ultimately went with Radar EV because it had vents for defogging, and was good for running and sports as well. Flight Jacket looks goofy, but it's a great cycling frame. I just wouldn't wear it in any other context.
S

VirusSixZero said:
The conditions you describe are good for Prizm Trail in theory...
Click to expand...

Great stuff VirusSixZero! That's exactly the kind of feedback I've been looking for. Thanks! The roads here (New England) are usually a faded black/gray asphalt. They are dark black when they are freshly paved, but you don't have to worry about potholes, cracks and frost heaves until they've been through a Winter or two and been bleached and faded with salt. It's not exactly the browns the Trail lenses were designed for but might not be too far off.

I haven't seen the Trail Torch lens offered on the EVZero line. I'll keep an eye out for it though. Reducing contrast sounds like what I am looking for rather than increasing it. Incidentally, I didn't mind my yellow lenses in bright sun, so maybe the standard Trail would end up being fine for me.

My current old yellow lenses are in a Jawbreaker knockoff. I got those to try out and see if that frame style would work for me. It didn't- the lower part of the frame blocks out cars behind me when I look backwards and the top part is in the way when I'm in a tuck. I made a special trip down to an Oakley store to try on all of their various frames with the intent of getting the Radar EV, but the top of the frame on those was still visible with my head down in a TT position whereas the EVZero Stride blew me away with its panoramic views and no blockages anywhere. If I'm going to shell out this kind of money for sunglasses, I want no compromises. Well, I guess except for interchangeable lenses...

sailracer said:
...the frameless evzero provides great visibility over the top when I'm in the drops or on aerobars and behind when I'm checking back for cars or how badly I've dropped my buddies
Click to expand...

Bro, I hear ya over the rattle of the peloton!
THE best all-conditions lens Oakley ever made for reading the road is VR50 Ruby photochromic, but they won’t sell you one.
They have too much invested in PRoad to let the riders decide for themselves.
I find the next best thing is VR28 Black, so what do I know...

flyer said:
Bro, I hear ya over the rattle of the peloton!
THE best all-conditions lens Oakley ever made for reading the road is VR50 Ruby photochromic,
Click to expand...

sailracer said:
I didn't mind my yellow lenses in bright sun, so maybe the standard Trail would end up being fine for me.

My current old yellow lenses are in a Jawbreaker knockoff. I got those to try out and see if that frame style would work for me. If I'm going to shell out this kind of money for sunglasses, I want no compromises. Well, I guess except for interchangeable lenses...
Click to expand...

Next time you get a chance, try on Flight Jacket. It has a similar wrap to Jawbreaker. I'm not sold on the nose bridge vent gimmick, but the upper field of view is hard to beat, and the lack of a top to the frame is good for venting. Let us know what you think if you try it out.

Oakley doesn't make a yellow lens, likely because they assume some urban use. Yellow is bad for exposure to artificial light, such as incandescent or LED bulbs. They can make glare worse. I love a yellow lens in the woods, but I'd rather a clear or Prizm Low Light lens if there are any headlights or bulbs around. In the sun, a yellow lens is better than nothing, especially if a helmet can spare you direct exposure.

I'm interested in hearing if Prizm Trail or Prizm Golf works for you, if you end up trying them. Try a direct in-store comparison, along with Prizm Low Light. If yellow and a photochromatic lens worked well in the past, PLL is kind of a combination of both, just without the darkening, but retaining the contrast enhancement.
S

VirusSixZero said:
Next time you get a chance, try on Flight Jacket...
Try a direct in-store comparison, along with Prizm Low Light.
Click to expand...

I tried the flight jackets on- they were fine at the top but the bottom frame was still in the way when looking behind you. For me that is worse than the top frame being visible like on the radar EVs. I also compared the trail and road lenses at the store, of course with the light conditions in the store I couldn't actually tell how they would be out on the road. With the nice, even artificial light the contrast enhancement on the road lenses didn't seem over-the-top. The trails definitely had more light transmission and turned everything a more unnatural color, but I couldn't evaluate how they would do in dappled light.
You must log in or register to reply here.
Share:
Facebook Twitter Reddit Pinterest Tumblr WhatsApp Email Link