🦘What Interesting FACTS/TRIVIA Do You Know About Oakley?

Oakley was founded in 1975 by Jim Jannard out of the back of his Honda Civic. In 1975 he designed a rubber grip for offroad motor cross handlebars, along with his other cycle parts.

"I'd have suggestions, and the response was typically, 'Shut up and go sell,'" says Jannard. "So I executed my own ideas."

He took the company public in 1995 and sold it to Luxottica for $2.1 billion despite there being bad blood between Oakley and Luxottica that stemmed from an incident in 2001, where Oakley sued Luxottica for selling unauthorized versions of its glasses at Sunglass Hut. The suit was settled two years later for an undisclosed sum.

On June 21, 2007, Luxottica announced a plan to purchase Oakley in a cash deal worth $2.1 billion, paying a 16% premium over the extant share price. The deal was completed on November 15, 2007, making Oakley part of a portfolio that includes brands such as Ray-Ban, Persol, and Vogue.

@jim jannard lives in Seattle and recently opened up a resort on a Fijian Island.

Jim graduated from Alhambra High school. He later went to University of Southern California to study pharmacy but later he dropped out from the college as he had great interest in motorcycles.

He's known to be quite private.

Little is known about how he spends his money, but he owns a $7 million home on Newport Coast, and in 1997 he paid $22 million for an island off Puget Sound, once known as "Safari Island" for big–game hunters. He has stopped all hunting and has worked to save the rare Ryuku sika deer found on the island. Additionally, Kimberly Brown Seely of Town and Country noted in the magazine's July 2001 issue that Jannard may have "quietly bought up" several adjacent multi–million–dollar coastal properties on Crane Island's western shore—part of Washington State's San Juan Islands. Jannard's floatplane, bearing the same skull–and–crossbones flag, has been seen in waters nearby.

During one of his rare public appearances outside the company, he gave a store opening speech wearing a gas mask and talking through a megaphone.

In January 1998, a black and white skull–and–crossbones flag appeared atop Oakley's company fortress on the hill. The company had paid $2000 to obtain county zoning approval for the banner but made no public statement as to its significance. Greg Hardesty of the Orange County Business Journal speculated two likely explanations: one involved a planet Mars line of sunglasses—the magazine advertisements that contained a skull and crossbones on an image of Earth; the other related to an acrimonious relationship with fierce arch–rival Nike, which opened up a subsidiary directly across the street from Oakley. Ongoing litigation between Jannard and former Nike friend, Phil Knight, continued well into 2001, mostly over alleged patent infringements. In any event, the ominous flag was noticed by neighbors, one remarking that it fit the company's "weird image." (encyclopaedia.com)

"Oakley Anne (English Setter and company mascot) was purchased from Sally Howe of Clariho Kennels in New Jersey as an 8 week old puppy in 1974." (Jim Jannard)

Romeo & Juliet were named not after Shakespeare's play, but rather Romeo Y Julieta cigars (J.J.)

The story on the #453 on the Oakley tank was not anything specific relating to Oakley. The tanks actual serial number when sold was #453. There were three tanks that were shipped from overseas to a company in Nevada. The tanks were decommissioned and # 452, 453, 454 were made available for public purchase. Oakley bought #453, and over time, the tank number wore off. They repainted it and it became more visible. So basically it was the tanks original serial number. (Ed. note - grammar edited) @Dyeraudio

"Vulcanized rubber was discarded for a unique synthetic, a composite of Kevlar® and Oakley Unobtainium® that parallels the traction technology of racing tires. A breathable lattice of high-tenacity O Matter® was interwoven with Kevlar® for the shoe upper, and breakthroughs such as three-point triangulated sole geometry and independent torsion response were added to enhance performance."

Origin of the eyeshades? Skiing
Jannard worked on the design for more than a year before Oakley's Terminator-look shields, first called Factory Pilots and later Eyeshades, debuted in 1985.

Back in the early 80's you always skied on sunny days (snow days as well) with sunglasses. Vuarnet, Ray Ban Carrera, Suncloud were some of the brands of dominance. Lenses were glass and they fell off your head easily. Nonetheless, unless you were serious about performance that is what you wore. Oakley had entered the snow goggle biz roughly around 1983. The goggle was an O Frame with a dual lens and venting. It was realized that skiers didn't like goggle, but they liked sunglasses so why not cross over.

Hence the Eyeshade was born.
1. Looked like an O Frame goggle
2. Brow foam (like a goggle) to reduce airflow, but enough to keep the lens from fogging.
3. Interchangeable "hook" ear stems to better keep them on your head.
4. And first of its kind a single "Plutonite" lens in a cylindrical geometry.
5. Like a goggle, interchangeable lenses. (Scott Bowyers) 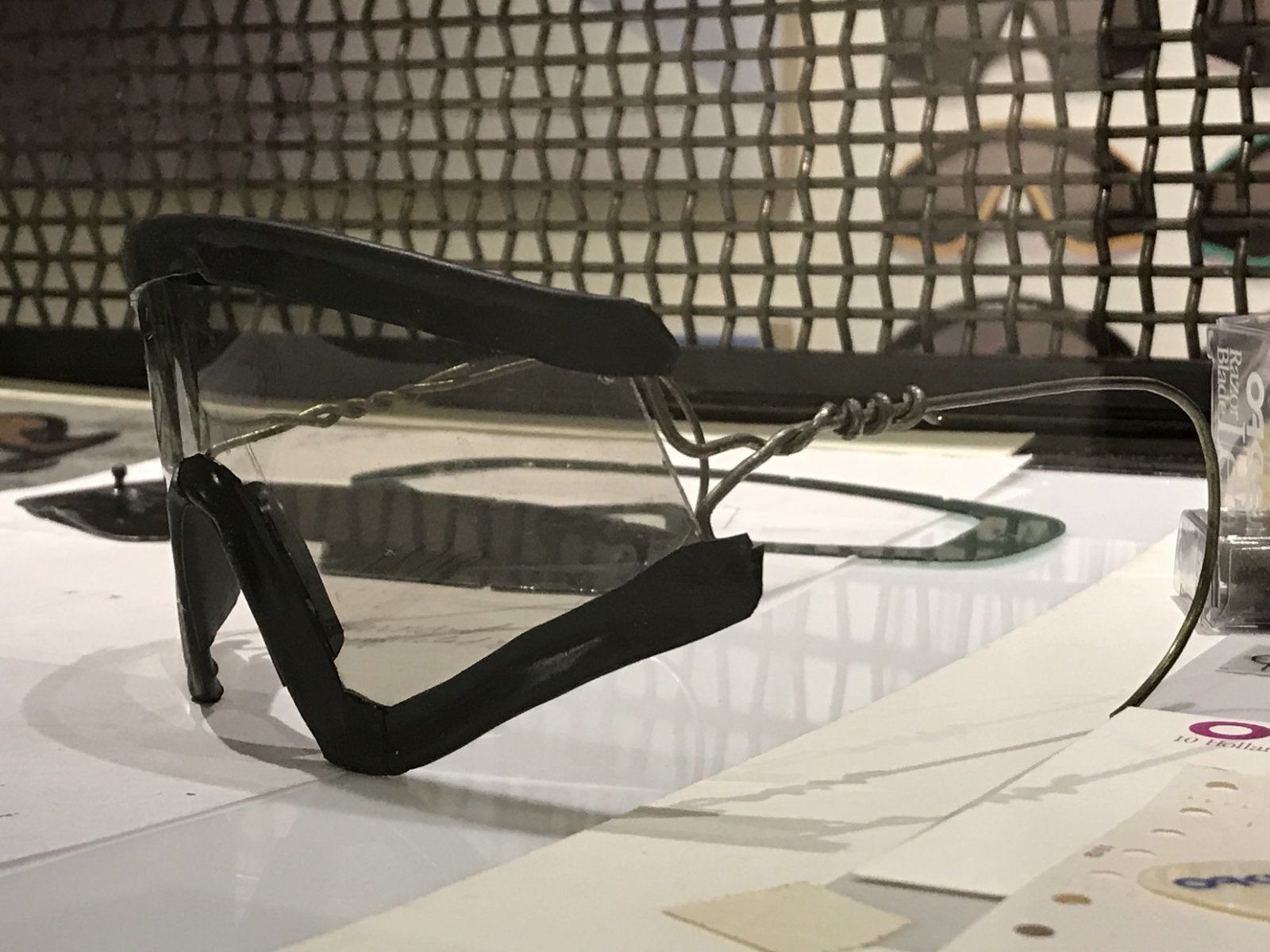 I am not really a boss, I like shenanigans

Too close for missiles, switching to guns

On the way back!

Speaking of the Eyeshade..... here is the 1st rendition of that iconic pair..... this pair is in the museum at Oakley HQ.... complete with hangar earstems. Dyeraudio said:
Speaking of the Eyeshade..... here is the 1st rendition of that iconic pair..... this pair is in the museum at Oakley HQ.... complete with hangar earstems.

I'm moving this photo up to the opening post. Thanks!!!

@Dyeraudio. Somehow I get the feeling you have more to contribute that we don't know about. Please do and I'll shift the info to the opening thread.
Last edited: 10/5/17

Here's the story of the origin of hammerstems, related to the origin of the M Frame (or the other way around). Info source was originally o-review from a long time ago, link now dead.

"The M Frame has evolved from a replacement for the Blade System to the modern piece of sports equipment we know today.

In late 1989, Oakley released the Mumbo (as most names then still had long titles) as a form of self-competition in order to phase out the Blades, but still keep sales high with the new model. The Mumbo was originally designed with straight stems like the Blades, however just prior to their release, Jim Jannard took the stems and 'hammered' them into the shape they soon became and thus providing the name 'hammer stems'. The patent for the decorative design had already been submitted, so these record show the original design. The straight stem release did remain for the Sub Zero's two years later and for the Baseball specific M Frame models.

The three original lens shapes were V, 67 and Hybrid, which was roughly an approximation of the two. In 1990 soon after their initial release, there was a conflict with Mambo clothing over the name, so it was switched to the M Frame while still keeping the term Mumbo on the box in order to lessen confusion over the name change."

And why is this thread in the off-topic section? If it's about Oakley, it's on-topic.

kronin323 said:
And why is this thread in the off-topic section? If it's about Oakley, it's on-topic.
Click to expand...

To be honest, I was going to put it in the Oakley Sunglasses discussion area, but recently I've noticed that the some of the mods have been clamping down a bit. Strictly speaking, this thread isn't about the "sunglasses" only. So I thought I'd play it safe.

That, and it’s flawed