Thanks to @kronin323 for pointing out the milestone. If I hadn't read his post stating I was at 5,999 I would have continued on without realizing. Not that this is somehow momentous and in need of real grandeur, but I felt like doing something a little more long winded.

Anyway, a quick current bio; I am in my late 20's, living in greater Metro Detroit. I attended a public university and have an engineering degree. I currently am the engineer for a company that deals with process control for fluid temperature and viscosity. I'm a very boring person, and I could regale you for hours on boring engineery stuff. I work with 2D and 3D CAD and create the drawings and models that are used to construct the systems we sell, as well as other fun (mostly boring to non-engineers) engineer type stuff.

Anyway, on to Oakley stuff.

I distinctly remember when I went from having a pair of Oakleys, to two, to thinking to myself "I want more, I want to collect Oakleys". It was ~February of 2008. I had my first pair, the XX Twenty, my second pair, an M Frame with 4 lenses, and then I bought a set of Goggles for no reason other than they were Oakley and on sale. And i even decided to take a picture of my collection in its infancy. 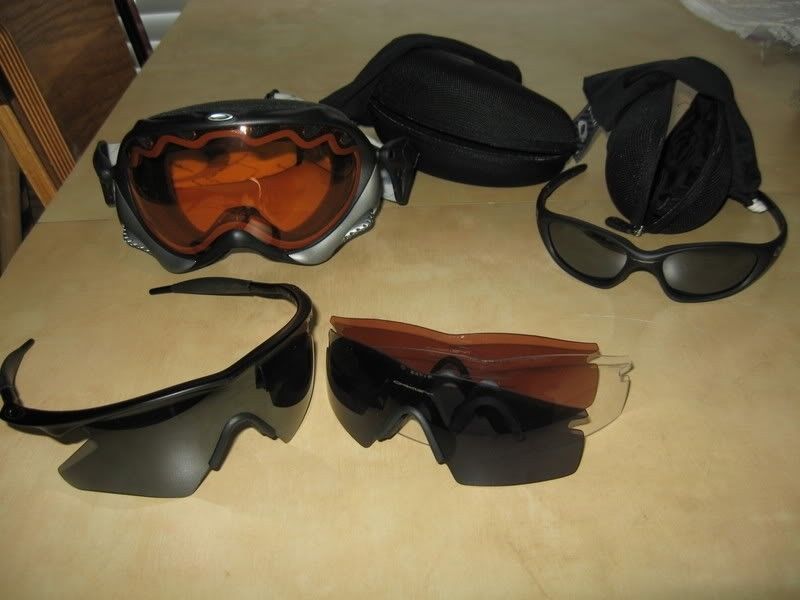 The collection now stands at orders of magnitude bigger, somewhere around 40 pairs of glasses and a host of other junk. Though only the M Frames remain from the original trio, at least 100 pairs have passed through my hands. And bags, hats, towers, accessories, watches... probably some other stuff.

But even considering myself a "collector" I really didn't get off my feet for a few years. I picked up another pair of M Frames not too long after that photo, I think I traded them for a pair of Half Jackets I had bought used. It wasn't until around 2011 that I bought a few more pairs and found this forum that things really started taking off.

So where am I? Mostly in functional pairs. No real duplicates. Nothing that just looks pretty on a shelf. The pairs I don't wear I sell. The pairs I couldn't sell got packed away. I've kind of always worked by this philosophy. The reason only one of the original trio remains is because I didn't need goggles, and the XX was too small for me, so they both got sold off.

Here's the next collection status photo I came across working backwards in my photobucket; 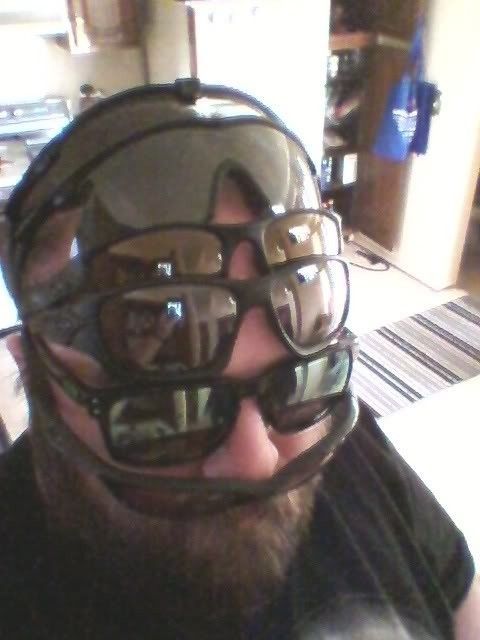 6 pairs. I thought it was excess at the time. I sometimes think I should move back to less than 10 pairs. It was a lot more simple then. Each pair had a mood, a specific use, I could spread a few around at work, in the car and still have a few at home. But I look in my tower and I have more than 6 that I look at and say to myself "I can't sell this".

But either way, within 3 months I had already doubled my collection. And added things like bags and gloves. 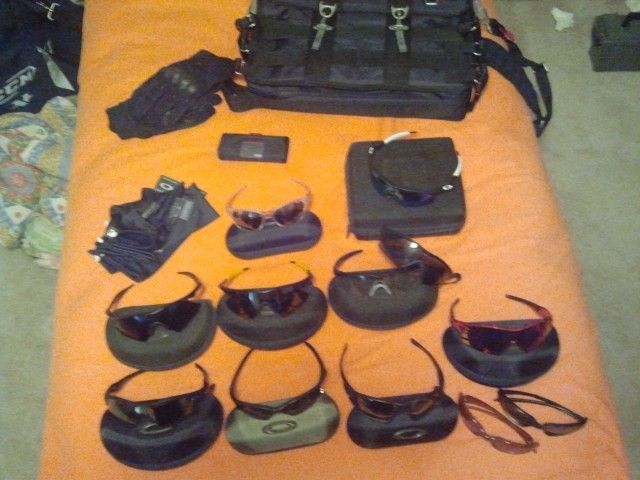 I also quickly realized I needed to take better photos. 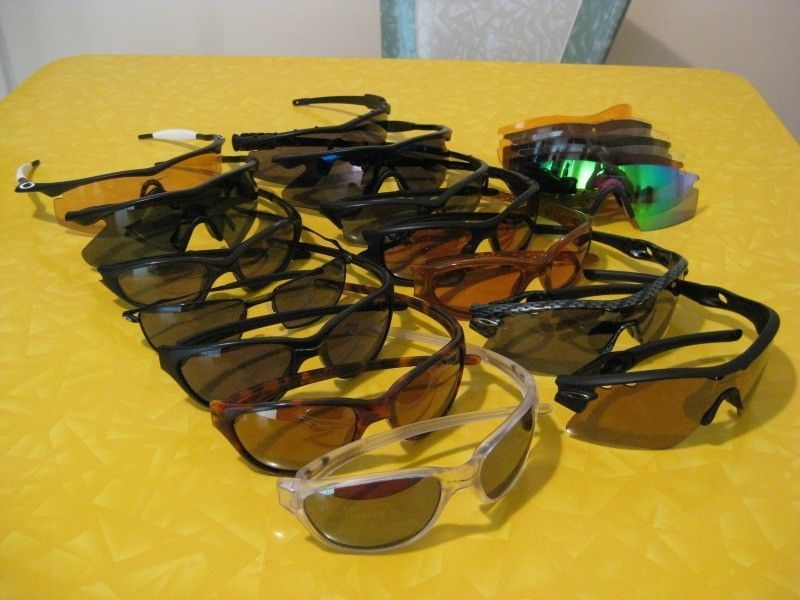 Some of these are still in the collection, but most are long gone.

Needless to say, this forum has been a bad influence on me. I've spent a LOT of money (for me) on sunglasses in the last 3+ years of being a member here. For a while I just bought whatever I found a deal on. Influence of my mother showing through, always looking for the deal. Pretty early in my collecting I focused heavily on the M Frame. 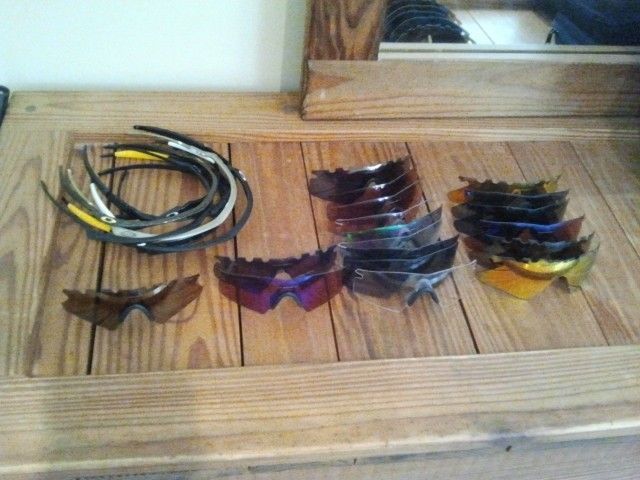 For me it's just the quintessential Oakley pair. Function, reliability, aggressive style, adaptability, customizable. I've gushed on my love for them quite a bit in the last few years. And although there are some new challengers coming up I don't think anything has surpassed the M Frame yet.

There have been some other frames that highlighted my collection, but most have since passed on to another collector. I've owned some artist pairs, most of the metals, and a wide variety of frames.

After my collection bloomed to over 50 pairs I've started trying to cut back. I've been hovering around 40 for a while now. Buying a lot slower. Selling what loses its charm with me. All of the metals moved when I just saw big dollar signs instead of a pair I couldn't wait to wear. Especially when other projects were being put on hold for financial reasons while I had several grand in shades sitting in a tower.

So where do I go now? I'm not really looking to grow the collection. I have some choice pieces, I'd like to get some spare parts before the M Frame supply dries up. Definitely interested in some of the new stuff coming out. Still picking up the odd deal here and there (Black Friday Vault deals!). I'd really love to have a much bigger collection, but I don't feel the financial ability to do so. As much as I'd love a carbon C6 it just isn't in the cards.

Short term plans? Find someone to take all of my NewFrogs, sell maybe 3 more pairs and permanently move out of the second tower so I can sell that. Keep myself confined to what fits on the 4 shelves of the main tower as far as sunglasses goes.

But for now I'm happy to rock what I've got.

And since I've put off posting for a few days to think of what #6,000 would be - here's my "what are you wearing" post for Friday. A couple SI pieces in tan. Snapped a quick selfie walking through the tunnel that joins buildings at work. I thought it captured the current state of the beard quite well. 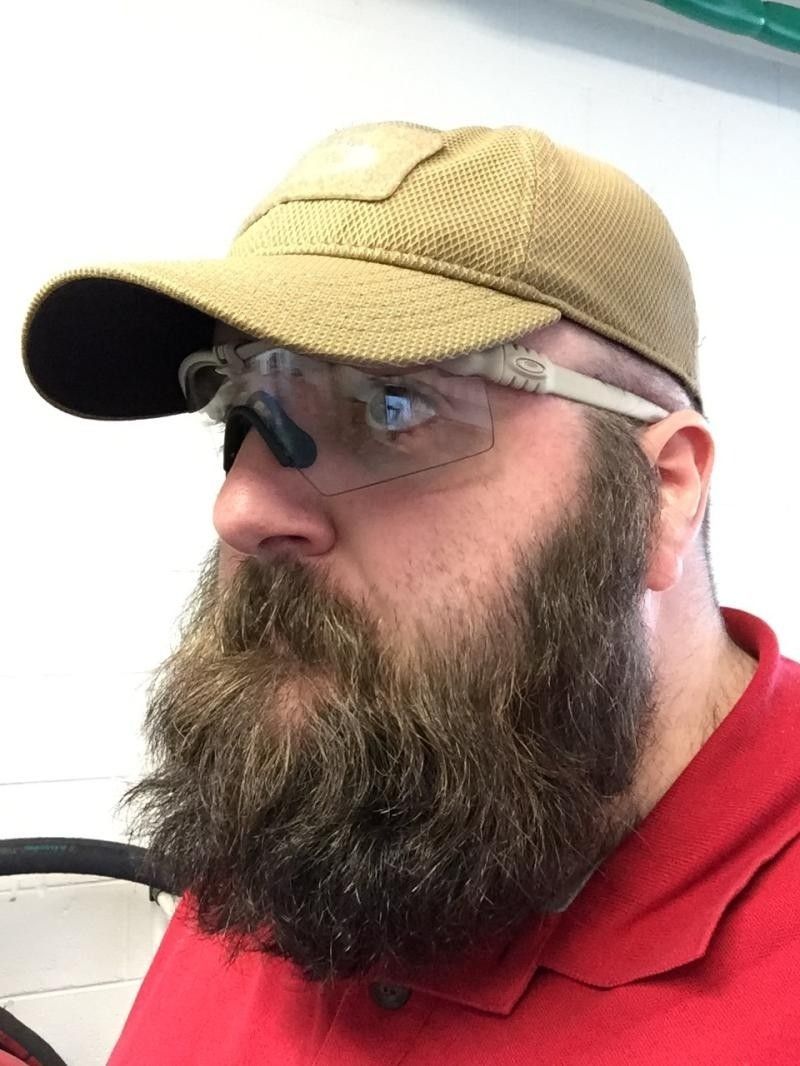 Congrats on the 6000 posts, always cool to see other peoples collections and hear how they have got to that point, thanks for sharing

Great story about your collection! It looks great and congrats on the 6,000

lol it was pure luck I noticed where your post count was at in time, saw it after QLR1 mentioned he was getting close to a milestone, too...

Rust you may be a little grumpy at times but you're one of the members that makes this place worthwhile. I've enjoyed our time together on the forum and look forward to more of it.

kronin323 said:
lol it was pure luck I noticed where your post count was at in time, saw it after QLR1 mentioned he was getting close to a milestone, too...

Rust you may be a little grumpy at times but you're one of the members that makes this place worthwhile. I've enjoyed our time together on the forum and look forward to more of it.

Curmudgeon. That's what I am.

Thanks for sharing your story, 6,000 post is a great mile stone! Congratulations

Keeper of the Skull

U
For Sale Monster dog collection
2 3