NEW RELEASE NEWS, Pass Along The Info To Our Members HERE...

I am hoping that this thread will find the attention of a few Oakley insiders or web crawlers like myself so that in the future we can share information on NEW RELEASES or sites still selling sold out or hard to find items. I recently missed out on the Atmos release due to lack of information available on the web.

We are all collectors and enthusiasts here so obviously we want and search for information on how we can be the first to get our fix, lets share that information when we get it so that others in our community here can benefit as well.

If you know of a upcoming release, find a location doing pre-sale, find out a release date, have any inside information or find a website still selling a sold out item.

PLEASE use this thread to inform the rest of us so that we may all benefit from the find instead of the ebay moguls buying for purely profit driven reasons.

Hey, Just read that Oakley signed MotoGP Icon Valentino Rossi to their team. Apparently he is a big fan of Oakley Holbrooks and is currently designing his own Holbrooks which will be know as the "V46 Signature Holbrooks". Keep an eye out for more info under this name.

Here is the Article from Business Wire

FOOTHILL RANCH, Calif.--(BUSINESS WIRE)--Oakley, Inc. today announced that MotoGP icon Valentino Rossi has joined the Oakley family as a brand ambassador. One of the most successful motorcycle racers of all time, Rossi respects the unbeatable performance and unrivaled style of Oakley eyewear.

“I chose to work with Oakley because they share my ambitious nature”
“Valentino’s thirst for adrenalin fits the Oakley brand perfectly,” said Scott Bowers, SVP of Global Marketing and Brand Development at Oakley. “He continually pushes performance to the limit, and he respects the fact that we earned our authenticity by doing the same. In all the sports that demand the best vision possible, world-class athletes depend on Oakley eyewear technology for the ultimate in performance and protection. Valentino respects and appreciates that fact. In addition to his record-breaking successes, he is known for his outgoing nature, and Oakley style speaks to his unique personality. We are honored that he has joined us to serve as a brand ambassador,” Bowers concluded.

TV journalists refer to Rossi as “The Greatest of All Time.” He is known for putting impossibly high expectations on himself, as well as his equipment. “I chose to work with Oakley because they share my ambitious nature,” said Rossi. “Their focus on technology and innovation is what makes the quality of Oakley products so exceptional.”

Rossi’s current favorite is Oakley’s Holbrook sunglass. He is working with the company’s designers to develop his own version of the classic style, and it will be known as the V46 Signature Holbrook. As brand ambassador, Rossi will be the face of the company’s Icon campaign in Italy and Spain.

Rossi has nine Grand Prix World Championships to his name, a record seven of which are in the premier class. He has cemented his status as a motorcycle icon with more than a hundred career wins so far. He currently holds the record of 79 wins in 500cc/MotoGP.

Visit Oakley.com to learn more about the company’s sport performance and lifestyle innovations.

How about some Goggle Lovin' 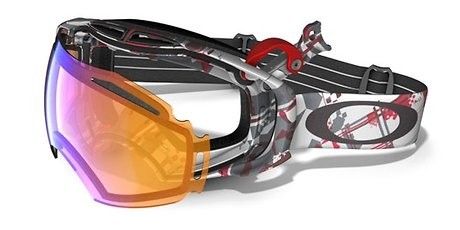 On the eve of the Winter X Games, Oakley hosted an exclusive media event where the future of snow goggle technology was unveiled by Shaun White. Introducing Oakley Airbrake™, a performance goggle with an interchangeable lens design that helps you adapt to the environment and enjoy the best vision possible.

Airbrake features Oakley SwitchLock™ Technology which provides a fast and easy way to swap out the lens to help you adapt perfectly to any weather condition. A locking lever mechanism releases the mounted lens in the blink of an eye, and replacing the lens is as easy as placing the lens on the frame and snapping the SwitchLock™ lever shut.

The snow goggle will ship with two lens tints. Additional lens options are available, so no matter what the mountain has in mind, you’ll be able to keep up with changing light conditions and maximize both performance and safety.

Look for the all new Oakley Airbrake to be featured on some of the world’s best athletes at the Winter X Games. We have it on good word that Shaun White and Jossi Wells will be wearing them on the slopes.

The Airbrake Snow Goggle will be available in Fall 2011.

i guess this fits under this, but for those of you who know oakley uses a hydrophobic coating on some of there lenses such as the x-squared, juliets and 95% of there sport line and a few others randomly. well thats now gone, they will no longer be putting that coating on there lenses, they are going back to selling the hydrophobic coating like they did some years back. not sure on the whole reasoning why but, thats the news on that. if anybody has more fill in, i'll see what more i get when i get back to work

Oakley Opens Times Square Store, Debuts Fast-Jacket Specks...
Event Details: Sat Apr 9, 2011 - 12:00am at Oakley ( 1515 Broadway and West 44th St. )
Oakley announces that the grand opening will begin with a media event on Thursday, April 7 and an all-day event for customers on Saturday, April 9 with hourly giveaways. Oakley will also use the oppertunity to showcase their newest line of sunglasses, the Fast Jacket

Not many people know that Oakley indeed does have a company mascot, but its not what you might think. That will change this Summer when Oakley launches "Tree Frog Collection". He appeared first on marketing material for Frogskins, the red-eyed tree frog affectionately named Jupiter quickly became a company lore for his (or hers) “temperamental personalty”, at least according to subsequent advertisements. Yet, it was the tree frog’s ability to survive under extreme adversities and those red eyes that made it extremely recognizable among early Oakley customers. The Jupiter The Tree Frog Collection is to encompass the GASCAN, the SPLIT JACKET, and of course the FROGSKINS. All will be the same greenish-black color tone on the frame and slightly Red Iridium lens, to name a few unique features............... All to be available in May 2011.

Anyone else have more information?

To celebrate the 100th running of the Indianapolis 500, Oakley has come with a new pair of shades to commemorate the event. The company’s new product is called the Indy 500 Pit Boss and will be available in limited quantity…100 to be exact. But what’s noteworthy about this deal isn’t just the sunglasses, but the fact they come with part of a brick that was laid at the historic track in 1909, when the track was built. Considering that only a hundred of these things exist, and you’re getting a historic piece of racing memorabilia, the steep price for the package may well be justified.

Anyone grab up any of the Indy 500 Pit Boss Limited Release?
A

- No more Hydrophobic lenses,, although lenses will come with a 6 month supply
- Jupiter (the tree frog) coloured jawbones ( Look awsome)
-Airbrake,, new goggle, will be released in winter. SOOO much easier to change lenses

There is more and will post when i know i can..